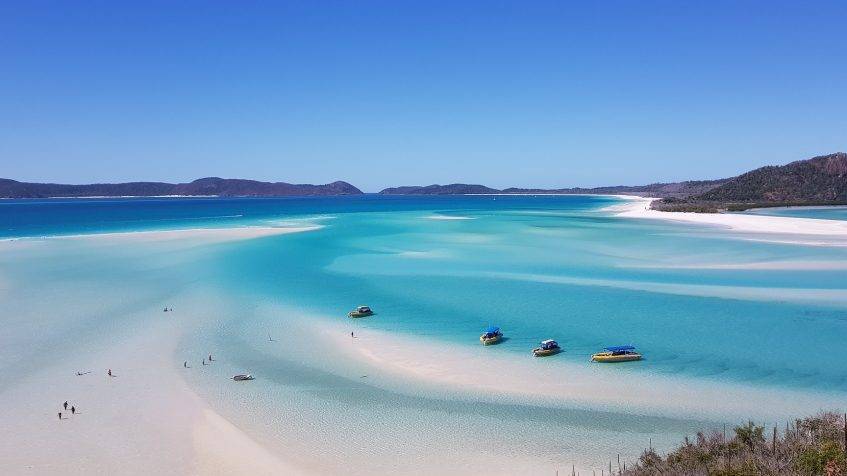 The famous Whitsunday Island lies in the golden mean. It is part of the Central Section of the Great Barrier Reef. There you will find Hamilton Island. 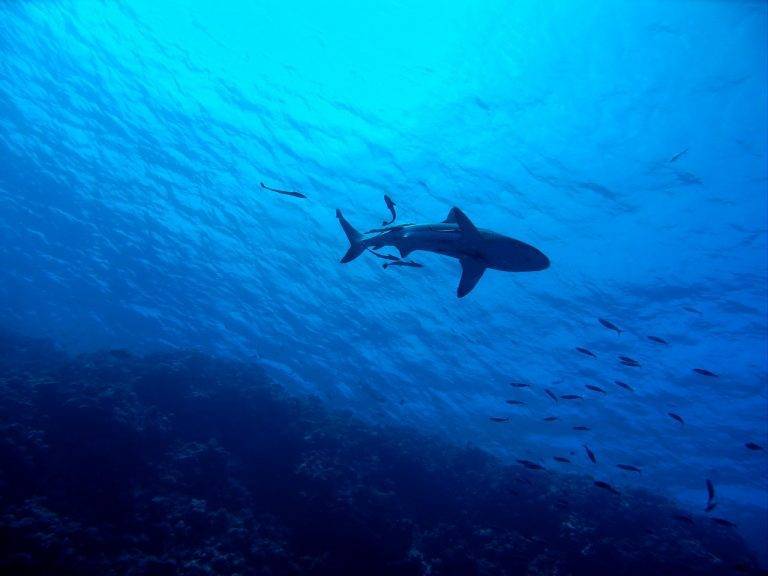 The famous Whitsunday Island lies in the golden mean. It is part of the Central Section of the Great Barrier Reef.

It is a world of its own. Just like a Maldives island. But this one is at least four times as big and covered by green slopes. Instead of a single hotel, there are half a dozen on Hamilton Island. Plus a supermarket, a shopping street and a harbour. Where big catamarans put down. Diving and sailing ships moor and shuttles from the mainland 25 kilometres away bring new guests.

Hamilton is the heart of the 150 island Whitsunday Islands. It sits practically in the middle of the Great Barrier Reef. The beautiful dive sites are just outside the door.

Less than 45 minutes on the sea, a water fountain rises close to the boat. Whales! And already the next one comes closer. Dives down and under the ship through and up again. Humpback whales curiously watching the ship. Just as we stare down. Jumping in and diving down with them is unfortunately not possible. The regulations of the marine park do not allow any impairment of the whale world. Every year between July and September they come north on their route to the Whitsundays. Some stay only three nautical miles from the coast.

After another hour we reach Bait Reef and a place called Stepping Stones. 18 corals reaching below the surface. At them it goes slowly into the depth. Up to 25 meters, where they start at the reef. The whole area is covered with antler corals, soft corals, gorgonians. A dream landscape. Through the Pinnacles you can dive in the slalom. Over rock banks, through small canyons or into caves. The most beautiful monolith is quickly found. Its particularly colourful and form rich vegetation attracts many reef fish. Anemone fish, napoleon lip fish, sweet lips. Lionfish also swim through the garden.

Manta Ray Drop-Off – The name says it all

The second dive is planned for the southern part of the Bait Reef. Manta Ray drop-off. The name is program. A steep wall that goes down to 36 meters. It is full of gorgonians, hair stars and whip corals. Reef sharks swim in front of it, and a manta ray glides into the depths.

The central zone of the Great Barrier Reef Marine Park is also one of the most sensitive for tourism. Here, too, not everything has been submerged for a long time. The exploration of the Whitsunday Islands and their reefs is still ongoing. So far 1000 fish species and over 300 coral species have been counted. One thing is for sure, in the Central Section there are more reefs and dive sites than one could dive in years. And what kind of reefs!

Diving in the Whitsunday Islands – The Best Dive Sites

Diving at Bait-Reef / Stepping Stones: Characteristic are 18 coral pillars between one and 25 meters depth. As well as numerous canyons in between. They are covered with soft corals and gorgonians. High fish population. Often strong currents. The visibility ranges from 20 to 30 meters.

Diving at “The Woodpile” / Hook Island: The best dive at a steep wall in the Whitsunday Islands! There is a lot of current around Hook Island, but it is worth it. Not only a drift dive. Also a steep wall with caves and rock overhangs. Up to more than 30 meters. Covered by soft corals, gorgonians and black corals.

Diving at Manta Ray Drop Off/Bait Reef: Situated on the southern side of the reef. Here you dive on the outer reef with over 30 meter dropping coral walls. Gorges and canyons. Also here black corals and long whip corals. Plus sharks and manta rays. Manta season is between May and September. 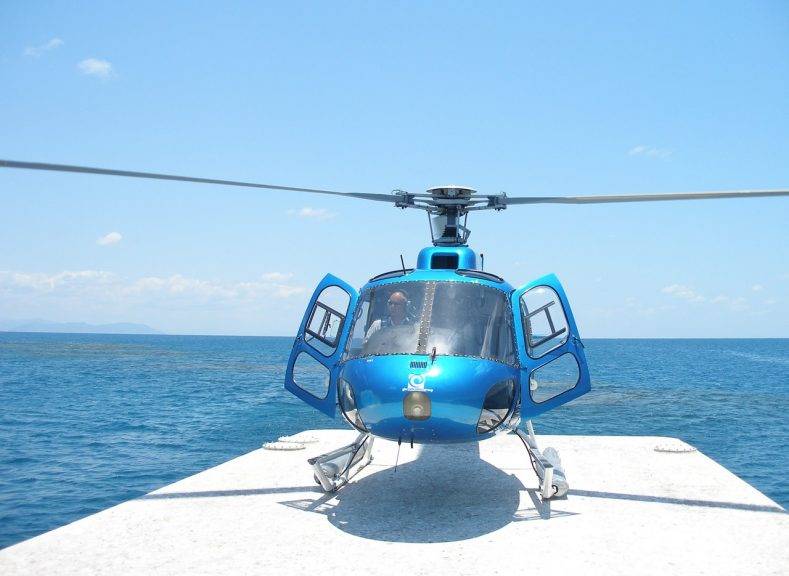 Hardly out of the sheltered Whitsunday Passage, Hook Island on the left and Border Island on the right, it gets restless. The Hook Island Passage is quite a challenge because it is open in the South Pacific. Strong currents prevail here in the channel between the islands off the mainland and the Great Barrier outer reef. On the catamaran everybody tries to get a safe place. Only the crew hurries through the corridors with gingerbread tablets and paper bags. After 30 minutes it gets quieter. With the proximity to the outer reef the atmosphere on board is relaxed again.

Every day the catamaran heads for the Hardy Reef in the Central Section of the Great Barrier Reef. The 2 hours trip leads directly to the west side. To a huge platform called Fantasea Reefworld. It is permanently anchored to the outer edge of the Great Barrier Reef with steel ropes. The pontoon adventure begins as soon as the landing stage is reached. The platform is so large that it takes hours to discover everything. Sun deck, diving centre and underwater observation chamber. The snorkeling deck, the diving boat up to the helicopter deck. The catamaran serves as a restaurant.

After the briefing, visitors will be equipped with snorkeling or scuba equipment. This is followed by dives in groups of four. It is quite fresh, the current provides cooling.
The current gets stronger, you have to hold strongly against it to stay at least on the spot. And that’s exactly what we want. Because the Queensland Grouper couple from Reefworld live under the platform. Right next door is Wally, the Napoleon wrasse. The giant grouper couple from Hardy Reef is the main attraction for the divers. And this, although the reef just behind it is also very attractive.

At a depth between 20 and 25 meters, diving at Hardy Reef is at its best. Stone and soft corals. Butterfly fish inside, wrasses in front. Black, whip and leather corals. Imperial, trumpet and lionfish. The inhabitants of the outer reef pass us in a fast pass.

The best dive sites at Reefworld 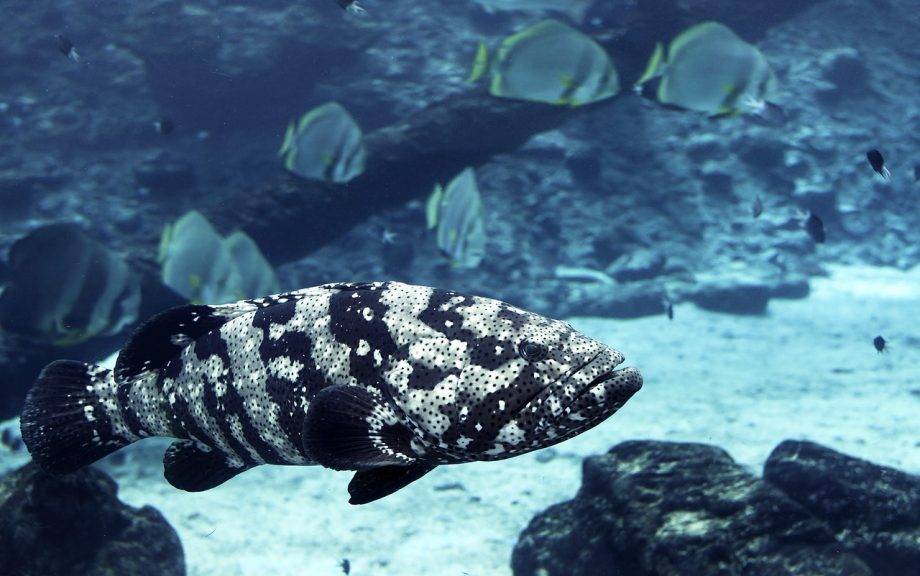 Diving at the Moon Pool (under the platform): The most unusual dive spot is directly under the platform. Tensioned ropes allow diving even in strong currents. This is almost always the case here. The reef is directly in front of it. Regular visitors are a big Napoleon wrasse and a pair of Queensland groupers. Plus: Angel fish, barracudas and the usual reef inhabitants.

Hardy Reef: Starting from the platform one dives to Hardy Reef. You can see soft and hard corals. Soldier, doctor and emperor fish. The dive leads to a depth of about 16 meters. Along the upper edge of Hardy Reef.

Diving in Hardy Reef Channel: drift dive at Hardy Reef. 15-minute transfer along the reef to the incision. Where the channel crosses the reef. With tide difference it forms a strong waterfall. Here the drift dive starts. It is crowned with a lot of “fish soup”.