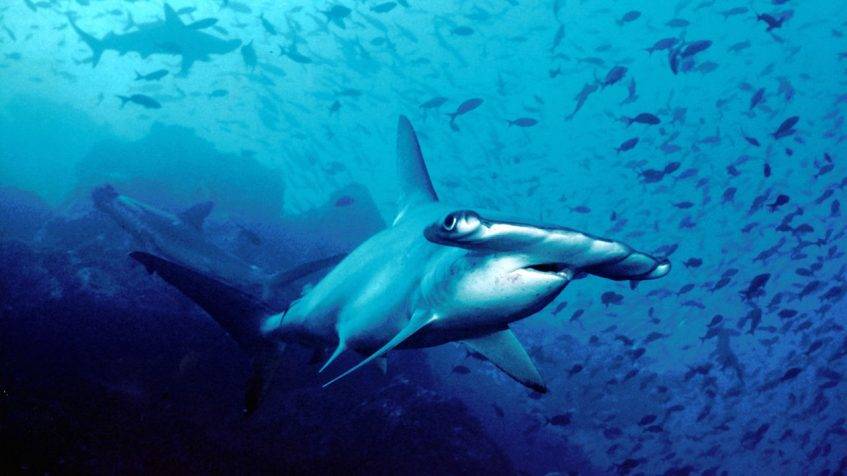 The Isla del Coco, in the Pacific off Costa Rica, is considered a true treasure island. Treasures from the times of the pirates are still waiting there in the jungle for their discoverers. But treasures can also be tracked down “one floor lower” off Cocos Island…

Want to dive in Cocos Island?

The tension on board is rising. After a 30 hour crossing the Isla del Coco is in sight. 500 kilometers southwest of the coast of Costa Rica. The island appears to be enormous. Densely overgrown by the jungle. Vertically rock walls rise from the Pacific. In between, wild streams rush into the depths. Huge stones lie on the few narrow and rocky beaches. High waves make access almost impossible. Loud rumbling can be heard where the surf rolls big stones like marbles. In addition, seagulls and frigate birds scream. They circle the steep rock faces. In the background the peaks of the 700 meter high mountains in the interior of the island. They are shrouded in clouds.

The history of Cocos Island

Isla del Coco, which belongs to the territory of Costa Rica, is also known as Cocos Island. Large, rugged, almost repellent, it seems. Mystically veiled and at the same time magically attractive.

Cocos Island is an island with history. With a past that makes you shiver. Even if you don’t know all the details. Isla del Coco, the island of buccaneers and pirates. Cocos Island, the treasure island!

Only in two bigger bays you can anchor safely and enter the island safely. One of them is Chatham Bay in the northeast. With the small island Manuelita on the right and Wafer Bay in the north. In the shade of tropical trees you can see some huts. Here lies the station of the rangers of the nature park. The only inhabited places on the island. On grey stones in the bay you will find the engraved names of pirate ships. Oh other boats that docked here left their mysterious signs in the rock. Who doesn’t think of encrypted signposts to hidden treasures whose existence on the coconut island is considered secure?

A hiding place for pirates

Cocos Island was always far away from all known shipping routes. Only an able navigator was able to find the island in the Pacific. Two sheltered anchorages, unlimited fresh water supplies and many caves offered ideal opportunities to hide the prey of pirates. They also used the island as shelter from the ships of their pursuers.

The new colonies of Spain between Mexico and Peru provided riches in the 16th century. Most of them were transported by ships across the Pacific to the narrowest point in Central America. Then it went on over land to the Caribbean side. To start their final journey to Europe here. The passage around Cape Horn was considered too dangerous for the seafarers.

The ships of the Spaniards, but also the coastal towns were attacked again and again by pirates and plundered. Most of the loot was taken to hide in Cocos. Names of famous pirates like Edward Davis and Benito Bonito are as firmly connected with the island as the Devonshire Treasure. The legendary Lima treasure with the life-size Madonna statue made of solid gold. According to witnesses, the English Captain Thompson hid it on Cocos in 1821.

A paradise for treasure hunters 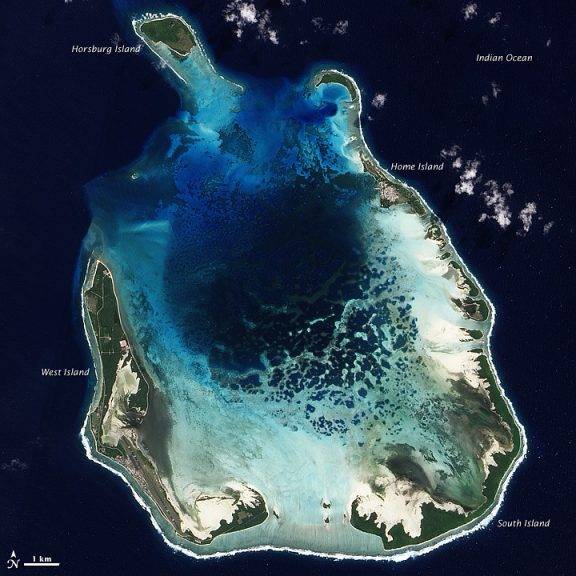 No wonder the island attracted treasure hunters. Old maps with entries were circulating. Everyone tried to make the big find. With bulldozers they dug up the beach of Wafers and Chatham Bay. Over 500 expeditions saw the island in the course of time, all oh- ne officially tangible success.

The most famous treasure hunter was the German sailor August Gissler. He settled around the year 1890 on Cocos Island. Gissler and his wife searched for the great treasure for almost 20 years. He built tunnels in the mountains. An incredible physical achievement! Anyone who has experienced the jungle of the Isla del Coco himself will confirm this. But all efforts were in vain. The treasure hunter died impoverished at the age of 78.

Some treasures have been found on the island since then. However, most of the finders betrayed nothing. Since 1993 the treasure hunt is officially forbidden because of nature conservation. But what escaped all seekers, lies directly in front of the island…

The underwater world of Cocos Island is the greater treasure. Already August Bebe, who dived 1925 before the island with helmet on the search for treasures, was fascinated. Years later she also fascinated Hans Hass and Jacques-Yves Cousteau. Today, divers succumb to the fascination of safari ships.

It was like the finale of a circus. Piedra Sucia, also called Dirty Rock, is the name of the dive site not far from Isla del Coco. First the hammerhead sharks had their appearance. Out of the blue nothing they appeared. Their eyes had us firmly in view. Some seemed to be especially curious. Only to turn off again quickly. Above us the shadows of more hammerhead sharks. Simply breathtaking!

Manta rays and Wahoos while diving on Cocos Island

The reef sharks on the sandy bottom we had almost overlooked. Because now the rays had their appearance. Full of elegance the big marble rays floated by. They approached us again and again. Only a few centimeters swam past in front of our cameras. Eagle rays followed for a short time. And already another actor came: The Manta Birostris! The star came with an attachment. Some fish took shelter under its mighty wings.

Accompanied by Wahoos we unfortunately have to return to the surface. But at least we had a little consolation. Also with the next descent here before Cocos Island we will experience again such a show. And so it was! 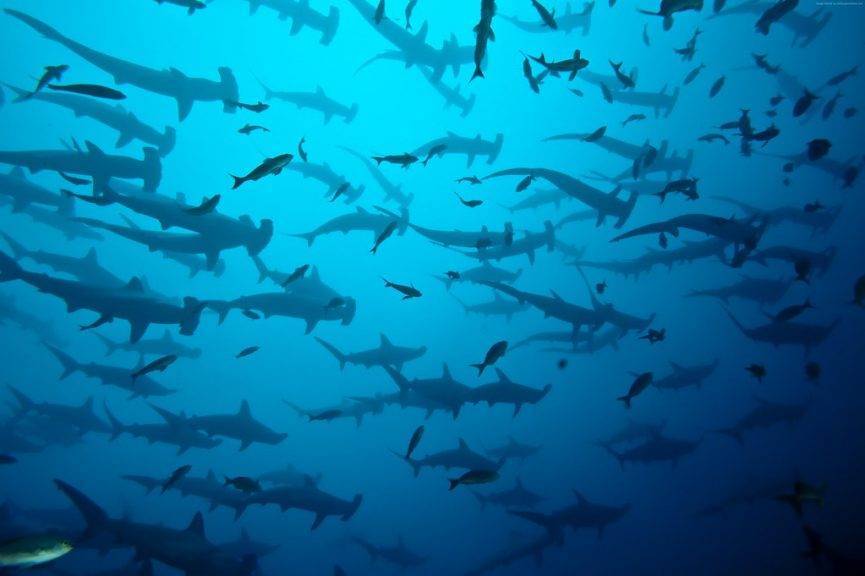 Diving at Dos Amigos: One of the best dive sites in the south of Cocos. It consists of two small rock islands. An archway and a 20 meter rock needle offer ideal photo motives. Especially the fish abundance and hammerhead shark encounters. Depth: 18 to 36 m

Diving at Dirty Rock: Rock needles that reach above the surface of the water. The site offers numerous caves with snappers and bigeye bass. In the open water you will find marble rays and schools of hammerhead sharks. Turtles, manta rays and, depending on the season, whale sharks. Depth: 6 to >40 m.

Diving at Manuelita: The largest offshore island off Cocos Island. With a huge cave that reaches far over the water surface. This dive site is also known for its encounters with hammerhead sharks. All you have to do is sit on a rock and wait until the show starts. Depth: 18 to 39 m.

Diving at Shark Fin Rock: Huge rock that almost breaks through the surface of the water. Here the many caves and passages as well as gigantic schools of jackfish are striking. Depth: 12 to >40 m.

Diving on Cocos Island at a glance

To dive on Cocos Island, divers should be at least Open Water Diver level and be familiar with currents, high waves and rapidly changing visibility. Often you will need your own equipment. Only weights and tanks are provided on many dive boats.

Cocos Island offers a 100% shark guarantee. Often they come within a few meters. Reef sharks can be found on every dive. Often you can also see deep sea sharks. Rays of all kinds, especially marble rays and manta rays are also represented. Dolphins, turtles, whales, tunas, mackerels and wahoos offer fantastic photo opportunities. There are no coral reefs. But huge rock formations. Breakthroughs, tunnels and crevices. You can dive anywhere. However, some places are special highlights. For example the dive site Piedra Sucia. Only limited diveable because of strong current is the south of the island. The travel time from Costa Rica to Cocos Island is between 30 and 40 hours.

Arrival for diving in Cocos Island: Flight to San José/ Costa Rica. Overnight in San José and transfer to Puntarenas by bus (about three hours). Europeans are required to have a passport valid for six months before entering the country. A visa is not required. The maximum stay is 90 days.

Best time to go diving on Cocos Island: The main season for the Isla del Coco runs from December to May. The low season is from mid May to the end of November. Crossings in the low season can be very stormy. So they are only for seaworthy divers. On Cocos Island there are seven metres of precipitation per year per area. Even in the best travel season there are short showers and thunderstorms daily in the interior of the island. The temperatures are 28 to 30 degrees Celsius all year round.

Everything else about diving on Cocos Island

Cocos Island belongs to Costa Rica. It is also called Isla del Coco and is of volcanic origin. The island is located 550 kilometers southwest of Costa Rica in the Pacific Ocean. It is uninhabited, stony and 25 square kilometers large. There are over 200 waterfalls on the island. At high altitudes you will find the world’s lowest tropical rainforest. There are only few ways in the jungle to certain points. Even for the experienced it is very exhausting to walk through them because of the high temperatures and high humidity. Cocos has been a national park since 1978. There is a complete ban on collecting and fishing in the park. The entrance fee for the national park is 50 USD per day / per person (as of 2019). The fees are collected in cash by the rangers.

Electricity: The power supply of the safari boats is American standard (110 V/60 Hz). Please bring the appropriate voltage transformers and adapters on board.

Currency: The official currency is Colones. US dollars are accepted everywhere. On Cocos Island only cash can be accepted by the rangers.

Other activities: The only sporting alternative to diving is trekking to the caves of August Gissler.  The wreck of an American B 24 bomber from the Second World War lies in the jungle at an altitude of 600 metres. After a four-hour hike from Wafer Bay, you can see the wreckage of the machine. Other interesting points: The waterfalls at Wafer Bay and the Gissler Caves.

Want to dive in Cocos Island?