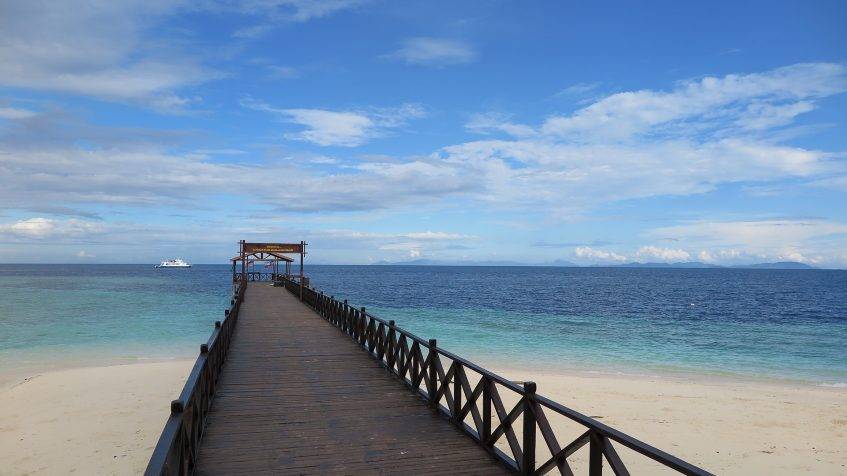 Who doesn’t think of Malaysia as a peninsula with the capital Kuala Lumpur? But there is also East Malaysia on Borneo. Three quarters of the island belongs to Indonesia. Sounds complicated? It is not! Follow us to Borneo in the East Malaysian state of Sarawak! Enjoy maximum diving fun off Sabah’s mini islands in the Celebes and Sulu Seas. And find out what connects swallows and divers in the South China Sea …

In stark contrast to this is the traditional way of life of many of the natives, such as the Orang Asli or the Iban. They still live in permanent groups in villages. Today the clans are very hospitable. Encounters are one of the highlights of a trip to Malaysia. In addition, you can discover tremendous treasures, especially in nature. Malaysia is still 50 percent covered with rainforest. It invites to discovery tours in numerous national parks. Ecotourism flourishes especially in Sarawak and Sabah, which are located on the island of Borneo. Rafflesia also thrives there. The largest flower in the world. In some areas you can meet rhinoceros birds, wild elephants or orang-utangs. Afterwards you can relax in one of the beach resorts of Sulu- or Celebes Sea. There you will also find the excellent dive sites. Besides big fish, they are especially known for rare animals in the macro area.

Want to dive in Malaysia? 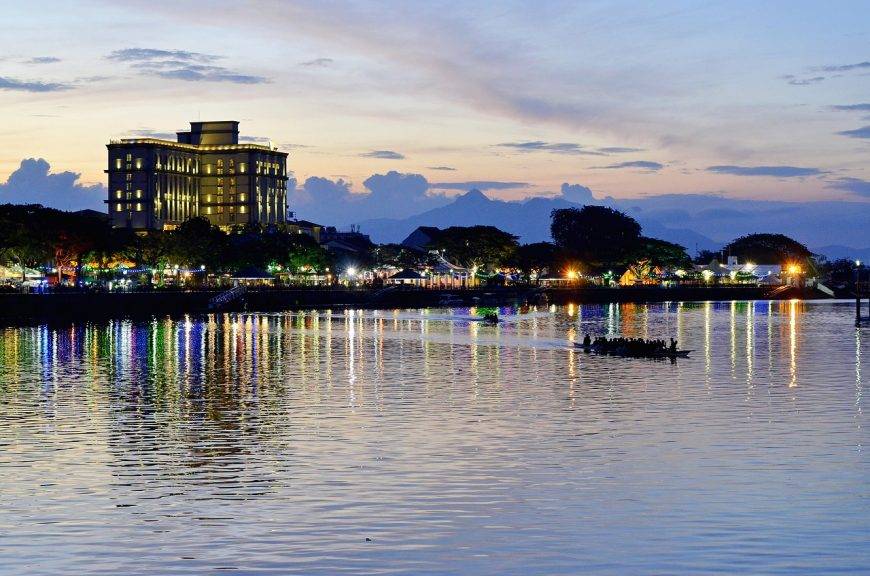 The state of Sarawak in the northwest of Borneo, rich in nature parks, is known above all among outdoor sports enthusiasts. But divers are also courted.

On the Canada Hill of Miri stands the “Grand Old Lady”. The first oil drilling tower in this region. It has long since retired, because today it is only mined off the coast in the South China Sea. But the old drilling tower symbolizes the prosperity that oil has brought for a hundred years. There is no shortage of restaurants and shopping malls. 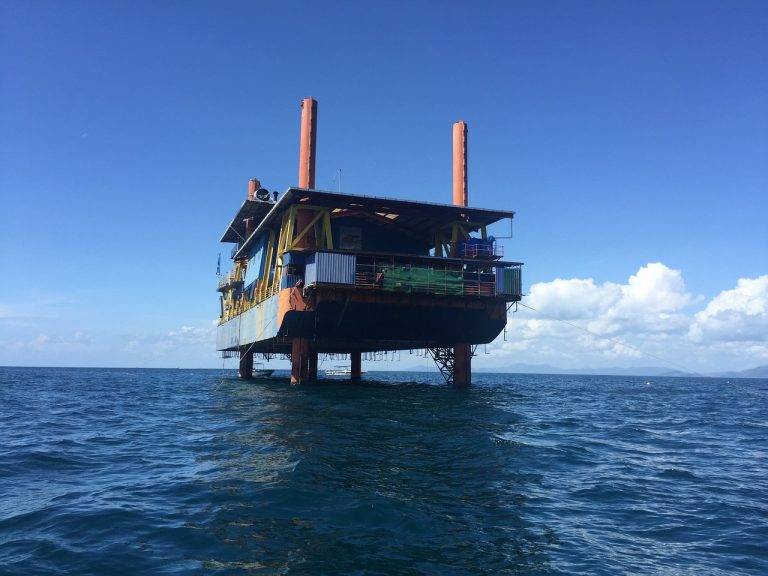 But they want more. Miri is developed as a diving and holiday destination. One self-confidently overlooks the fact that white beaches and lagoons are missing, as in Sabah. The strengths of Sarawak lie in the natural treasures of the national parks. As well as a comparatively unknown diving area.

The rarely clear water off Miri’s coast is very species-rich and primarily interesting for macro fans. Especially under the oil platforms a lively life with a multitude of fish has developed. Soft corals and gorgonians thrive. There are also anemones. However, the vegetation is not to be compared with the splendour as one finds it on the island Layang Layang. But diving among these giant drilling rigs still has its charm. 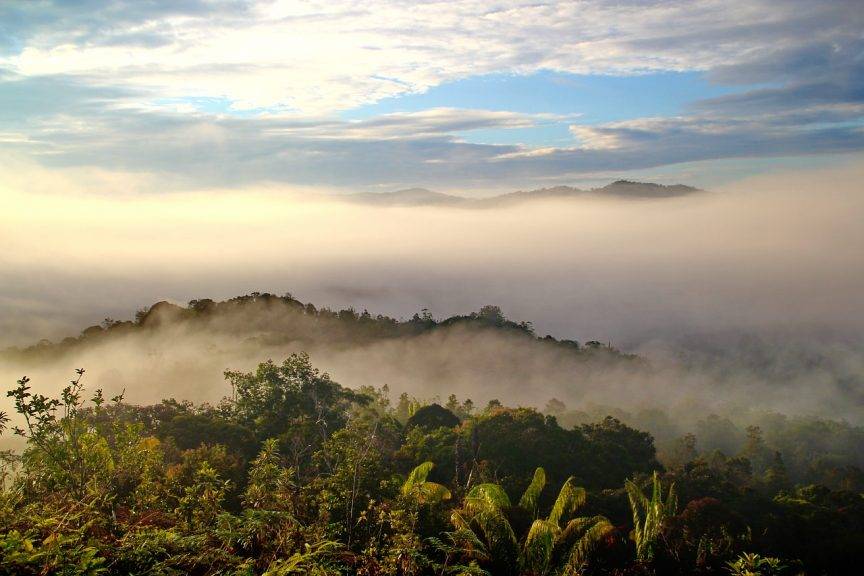 For the most famous nature park Sarawaks one should take in any case a lot of time. Because the Mulu National Park, which can be reached in 25 minutes by plane from Miri, is really phenomenal. In the mountains live gibbons, hornbills and dwarf deer.

Visit to the natives

A visit to one of the longhouses is also a special experience. A way of life that many of the Sarawak ethnic groups still practice today. Up to 150 apartments stand like row houses on stilts. With a continuous, roofed veranda. On which the social life takes place. 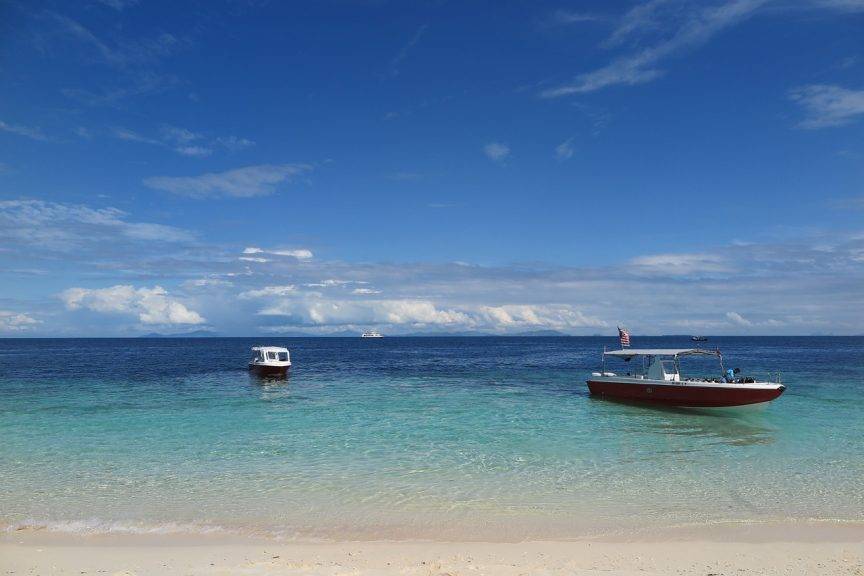 The island of Sipadan is still considered one of the diving paradises of the world. But the reputation has got scratches. On the one hand too many divers have jumped on the divespots for years. A reef has to cope with such a rush.

In addition there is the amount of waste water from the resorts, which reaches the reef through the bottom of the island. Despite everything: Sipadan is still worth a trip.
Sipadan used to have resorts. But to protect the environment, they were closed around 2002. To dive on Sipadan you have to stay overnight nearby. For example on Mabul, Kapalai or in Semporna, and with a boat on the island go.

Special conditions for diving on Sipadan

Since Sipadan is now a protected area, only a limited number of divers are allowed there every day. It is only allowed to stay on the island from 08:00-15:00. Thus all diving schools start and finish their dives around the island in this period.

From the main beach of the island it is only 20 meters over the reef to the top of the reef wall. The 1.000-2.000 m drops off. Sipadan is surrounded by a very rich reef life. It consists of hard and soft corals as well as reef fish of all kinds. Turtles and reef sharks can be seen on almost every dive. Huge schools of jackfish, barracudas and parrotfish are also highlights. Especially around Barracuda Point. Around Sipadan you will find mainly the larger creatures. The dive sites around Mabul and Kapalai are better for macro photographers.

The visibility ranges from 10 m to 30 m and more. However, it decreases on stormy rainy days. Many dives here consist of drift dives. The currents around Barracuda Point are strongest. Dives on the steep wall usually take place at a depth of 20-25m. Although deeper dives are also possible for technical divers. Your last dive of the day usually takes place at a shallower location.

Since 2013 the following rules apply to diving on the island of Sipadan:

This is probably due to strong currents at some dive sites.

The best dive sites on Sipadan

Diving at South Point: steep face with big fish guarantee. You can see grey reef sharks and whitetip reef sharks. Barracudas and turtles as well as seasonal even manta rays and hammerhead sharks.

Diving at Barracuda Point: schools of mackerel, barracudas, tunas and various shark species. They roam the blue water before the drop off.

Want to dive in Malaysia?