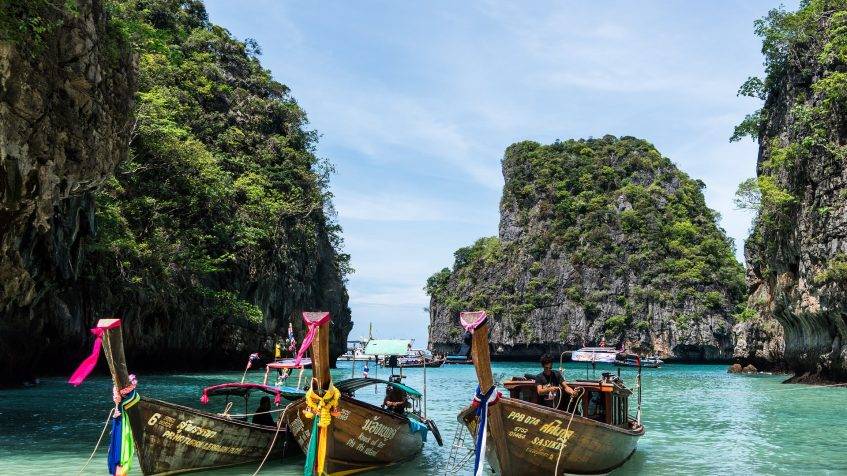 Granted: The tsunami affected many a coastal strip of Phuket. But the tragedy of 26 December has also given rise to a new opportunity, as the local authorities now want to curb some of the excesses of mass tourism. And so you can dive better on Phuket, recover safely and go on holiday than ever before.

Want to dive in Phuket?

Everything about diving in Phuket 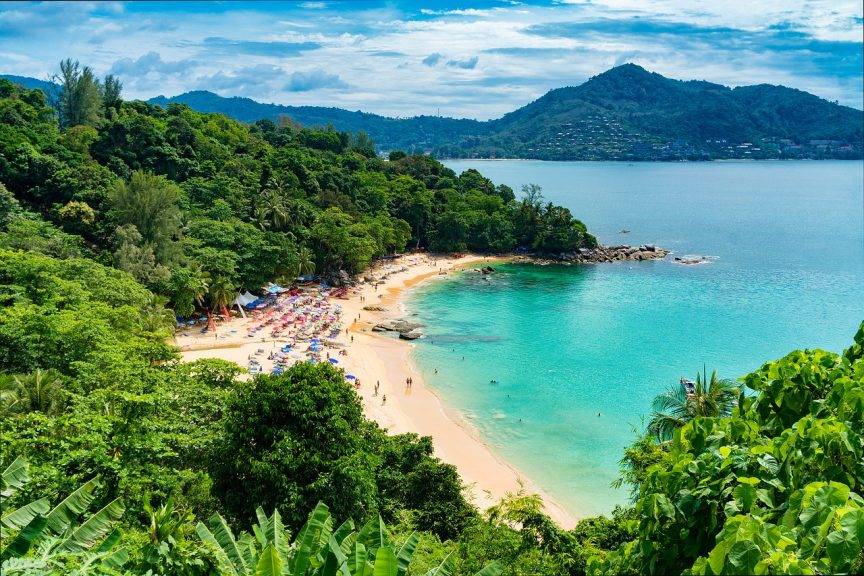 Longtail boats are bobbing silently in the shallow bay of Rawai Beach. The sea is calm. Just like around Phuket. The sheltered location of the island and its mineral resources attracted many people to Phuket in the course of time. Already around the year 900 Indian and Arab seafarers landed. Around 1200 Thailand’s richest province is mentioned for the first time in historical traditions. In none of these testimonies, however, is there talk of a tsunami. Phuket was always a safe place and still is today.

The history of Phuket

This security was also a reason for the prosperity of the island. There have never been major natural disasters or military conflicts. In the 16th century pearls, precious stones and ivory were still traded here. Later the first foreigners came permanently to Phuket. However, at that time only to do business. Tin mining created further wealth in the 19th century. But Phuket’s development progressed over time. Shrimp farms, fishing, agriculture and increasing tourism created flourishing landscapes in the 20th century. Today they represent the main income of the evergreen island with its magnificent sandy beaches.

For many inhabitants of Phuket this tourism means their daily bread. They know best what happened in December 2006. The tsunami left only a few places like Patong, Bangtao, Nai Nang and Kamala Beach damaged. At Chalong Beach, where many diving schools are located, there was almost no sign of the wave.

Karon and Kata Beach, the popular beaches with their shops and restaurants, have long since returned to normality. Patong Beach also shows a similar picture. Restaurants and cookshops at the promenade of Rawai Beach and elsewhere have been in operation again for a long time. At the Patong one wants to learn lessons from the time before the catastrophe. Thus, the maximum number of deck chairs on the beach should be limited in order to avoid crowds during the high season. There are similar plans in Nai Harn Beach. 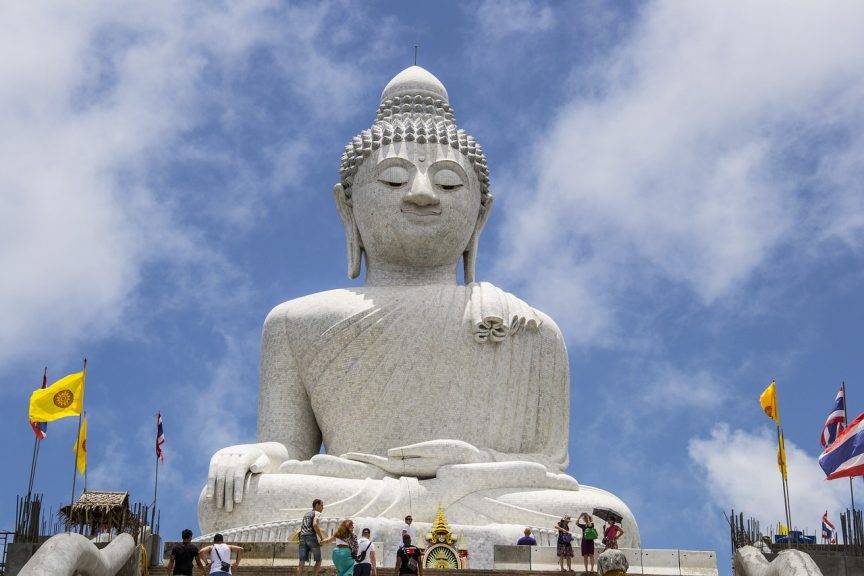 The Thai industriousness in rebuilding has given Phuket an undiminished extensive leisure program and dazzling nightlife. Be it a city stroll through Phuket Town with its typical flair or an extended shopping tour. The city is expanding and becoming increasingly modern. Shopping centres have lined the streets for years and form a contrast to the small shops on the outskirts or in the old town.

There is also variety outside the towns and villages. Pineapple and rice fields on the one hand, rubber plantations on the other. Dark jungle and green mountain tops here. Mangroves and the mushroom-like islands in the Phang Nga province there. Small settlements lure with a hearty snack. Wonderful vantage points like the View Point at Nai Harn grant dream panoramas. From Phuket Hill you have a great view of the city and surroundings. The island has no big rivers. Only a few streams with beautiful waterfalls. Like the Bang Pae- and Tone Sai waterfall in the northeast. Or the Kathu waterfall in the west. To the landscape belong also the numerous offshore and hardly inhabited islands. Many of them are worth a day visit.

Worth seeing temples on Phuket

Despite tourism and many foreign influences. The faith of the Thais in the Buddhist religion is unshaken. At many places on the island you will find temples. The so-called Wats. With their golden decorations and red tiled roofs. The famous Wat Chalong gives especially in the early morning an unforgettable impression.

Also the numerous Chinese temples are worth a visit. On Phuket and in the province Phang Nga there are further monasteries. Like the temple of the Golden Buddha, the Wat Phra Thong. Or near the city of Phang Nga the Tham Khuha Sawan with its colossal Buddha statues. 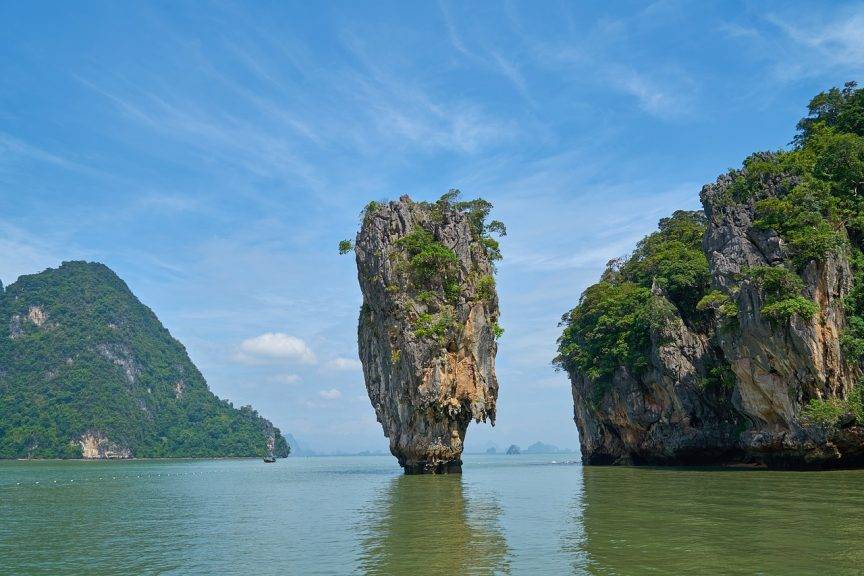 The range of sports on and around Phuket is huge. Water sports and especially diving dominate though. The green-blue sea is predestined for surfers, sailors and divers. The fact that more than 90 diving bases have already established themselves on Phuket shows how great the demand is. Fortunately, the tsunami caused only minor damage to most of them. The operation is running normally again. As normal as the world presents itself under water. Because the unique dive sites in the Thai Andaman Sea have survived everything almost undamaged.

Only at a few spots like at Kho Raya Noi or at Christmas Point at the Similan Islands the tidal wave caused big damages. But most of the time only a few hard corals were broken off. They now grow on the sandy bottom. The fish world showed as little consequences as the rest of the flora and fauna.

This applies to the area around Phuket and further south. But also for the Similan and Surin Islands. Koh Bon, Koh Tachai or the famous Richelieu Rock. Seen through the ecologist’s diving mask, the Andaman Sea is 95 percent as it has always been.

The best Dive Sites for diving in Phuket

Diving at Shark Point in Phuket: Protected as a marine reserve since 1992, this site embodies the expression “the living reef”. School fusiliers pass by in blue; hunting trevally dart in and out. Reef fish are everywhere and the corals form a kaleidoscopic background. Leopard sharks rest on the sandy areas at the base of the battlements (18 metres to 60 metres to 66 metres) and bamboo sharks can be found among the hard corals and rocks. Don’t overlook the small things – you’ll find numerous shrimp species, moray eels, lionfish, scorpion fish, squids and much more.

Diving at Koh Dok Mai: This is an excellent wall and drift dive with hidden caves and crevices lurking in the limestone wall. Glide through the gardens of yellow tube corals and look out for moray eels peering out of the reef. The beauty of this site is illuminated by the sun’s rays from above, and from November to April it is home to baby sharks and whale sharks out in the big blue. The variety on Koh Dok Mai is among the best in Thailand and no dive is ever the same.

Diving at the Anemone Reef in Phuket: This limestone peak, rising from 30 metres, is completely covered in a breathtaking mass of multicoloured anemones. As expected, anemone fish are not scarce here, but the summit also attracts a wealth of reef life, including fusiliers, snappers, butterfly fish, fanfish, trumpet fish, sweet lips, triggerfish, moray eels and a range of creatures.

Diving at Bida Nok / Bida Nai: These two limestone islands are breathtaking, both above and below the water, with breathtaking walls where sea snakes and hawksbill turtles live. Bida Nai also has numerous caves and overhangs where seahorses and other small animals like to hide. The highlight here is the wide marine life of moray eels, wrasses, barracudas, leopard sharks, ghost pipefish and scorpion fish camouflaged on the reef.

Want to dive in Phuket?