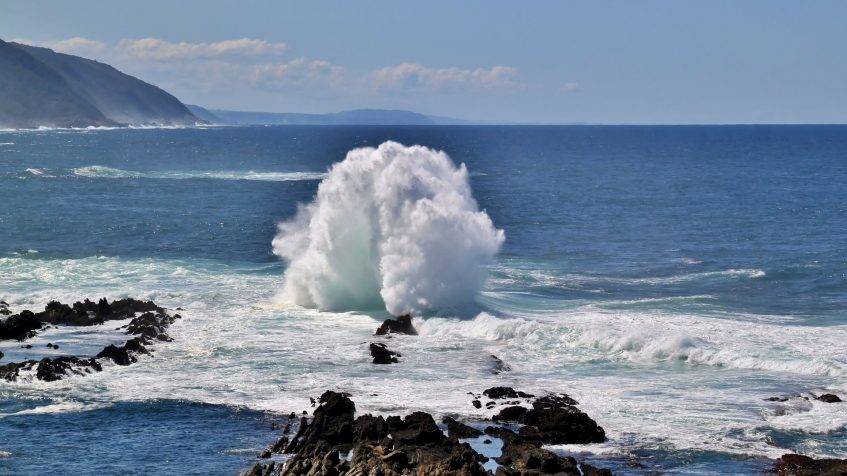 Colourful cold water worlds. Playful seals, sharks and whales. Also a real cemetery for ships. Diving in South Africa has a lot to offer! The Cape of Good Hope is appreciated by divers today as it was once feared by seafarers.

Cape Town is the third largest city in South Africa after Johannesburg and Durban. Many call the metropolis the most beautiful city in the world. To the west lies the open Atlantic Ocean. In the south is the Cape Peninsula. With the Cape of Good Hope at the top and False Bay to the east. The most important sights are Table Mountain, the former prison Robben Island and the Cape of Good Hope. More than three million people live in the Cape Town area.

At Cape Agulhas, the Atlantic and Indian Oceans collide. This is also the southernmost point of the African continent. The only thing that separates us is a marker stone on the shore. Under water the floods flow into each other. There are no sharp boundaries for flora and fauna.

Want to dive in South Africa?

The best times to dive in South Africa

Further west, it’s different. At the Cape of Good Hope south of Cape Town. The headland separates the west coast of the continent from the relatively protected False Bay. And this border is a real one. Because the open Atlantic is shaped by the Benguela stream. It provides rough water and cool temperatures between eight and 15 degrees. Whether dives are possible here is therefore entirely up to the weather. In False Bay the warmer Agulhas current has a say. Therefore it gets a bit warmer here. And that’s why you can dive here all year round with some certainty. But it won’t get much more than 18 degrees. Visibility is usually around ten meters. But they can clear up to 20 meters.

Unfortunately the dive can be cancelled completely if the winds are unfavourable. So Cape Town’s diving bases adjust their flag according to the weather. From May to August strong winds on the west side of the Cape Peninsula cause big waves and bad visibility. While in False Bay the water clears up. From September to April the wind turns. Season for the Atlantic side and for the eastern side of False Bay.

What you can see while diving in South Africa 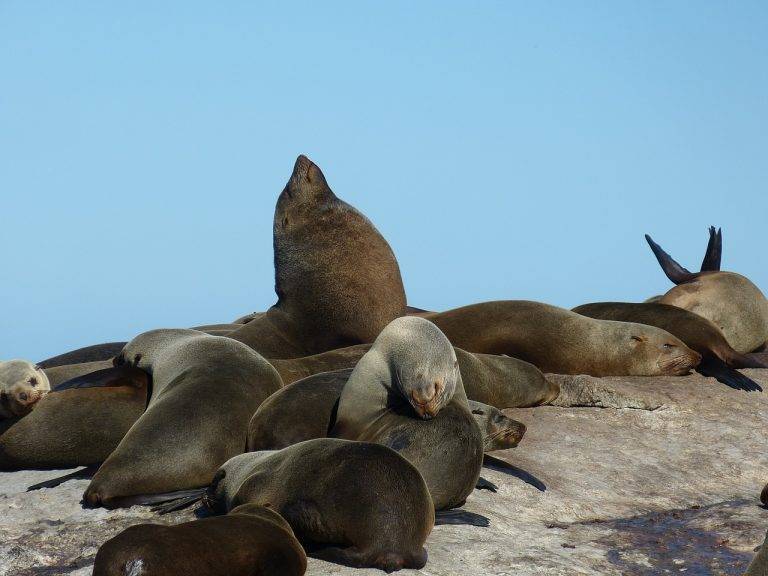 Also with the diving sights there are differences between west and east. The reefs of False Bay are all covered with colourful vegetation. With sponges, soft corals, gorgonians and anemones. Larger fish like tunas, rays or sharks also prefer the False Bay side. From July to October you can even watch whales from the boat or the coast. Then winter is in South Africa.

Also on the Atlantic side the reefs are beautifully overgrown and colourful. But you will find a lot of sea grass and kelp in many places. The fish life plays less of a role here. Lobsters and various starfish rank first. Nudibranchs, soft corals and anemones. From time to time you will come across a catshark or tremor ray. In January, February and March you have good chances to see a lunar fish.

The reefs are just the first strike. The second one follows immediately. Not far from Miller’s Point, a place south of Simonstown. There not only many dive trips start. A colony of sea lions lives on a barren rock. Divers are welcome guests with these mammals. A clap of the dive guide and the playful journeymen glide into the only few meters deep water. Between the kelp rising up at this point. What then begins is a game with the surf and with the divers. A posing, hitting hooks and bumping in the constant ups and downs of the waves. If you didn’t believe that you can take curves at full speed, you’ll learn better.

On the other side of the Cape Peninsula, off Hout Bay, you’ll find a colony of Cape Fur Seal. You can also dive or snorkel with these mammals.

It goes without saying that the infamous Cape of Good Hope is also a gigantic ship graveyard. Among the best dive sites are the wrecks of Smitswinkwel Bay. These include the Rockeater, a diamond boat. The Princess Elisabeth, once a fishing boat. As well as the two large frigates S.A.S Transval and her sister ship, the S.A.S Good Hope. The latter is probably the most beautiful wreck on site. The warship lies at a depth of 35 meters. It offers several possibilities to penetrate into its interior. The largely preserved superstructures and the radio mast make it possible to visit the wreck as a multi-level dive.
The S.A.S Pietermaritzburg is considered a wreck for beginners. In 1996 it was cleaned and sunk as an artificial reef. Today the Pietermaritzburg lies on the bottom at a depth of 22 meters. With the deck at 18 metres and superstructures reaching up to twelve metres below the surface.

The passenger steamer S.S. Lusitania is also popular. On April 18, 1911, the steamship ran up Bellows Rock in dense fog as it circumnavigated the Cape. As the giant was still able to stay afloat for two days, almost all the people on board were rescued. Eight dead were nevertheless to be lamented. Although the hull has almost completely collapsed in the last 93 years, its shape is still clearly visible. As well as a large steam winch and the mast. Tiles and tableware are still in their final resting place. The really last one, because the Lusitania is a historical wreck under monument protection. Therefore nothing may be removed. The ship and the nearby reef are covered with sponges and soft corals. Swarmed by fish and inhabited by lobsters. Often it is flown over by large schools of tuna.

Diving with whales in South Africa

A dive guide remembers the last open water dive with overjoyed beginners in November. “Two southern right whales kept us company during the dive. The special thing was the shallow depth. The first contact was at seven, the second at five meters. There one does not know for loud whale at all, where one should swim to.

Batsata Rock (False Bay): A reef dive with many passages and overhangs. Often you will see dogfish, rays or shoals of tuna fish. The reef starts at 30 meters with beautiful vegetation. Sponges, anemones, tubeworms and nudibranchs are predominant.

Photographers Reef (False Bay): The reef lies at a depth of 15 metres. It is a paradise for underwater photographers with its colourful inhabitants. It is covered with sponges, soft corals and gorgonians. On the top of the reef you can admire kelp forests. You will often meet cat sharks, and from time to time you will also be asked to play by dwarf sea bears. 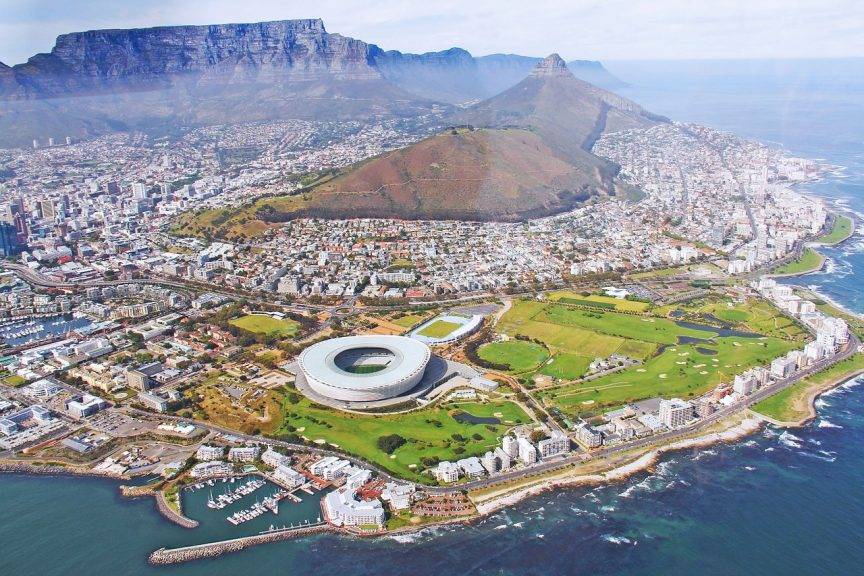 Table Mountain Reef (Atlantic side): Due to its depth of 37 meters it is more suitable for advanced divers. The reef impresses with its colorfulness and inhabitants. Among them are lobsters, crabs, starfish and nudibranchs. Also the vegetation of soft corals and sponges is beautiful. On good days, dwarf sea bears accompany you.

Maori (Atlantic side): The Maori is the oldest diveable wreck of the Cape Peninsula. The British cargo steamer was on its way from London to New Zealand when it ran aground in 1909. Even today, porcelain shards can be found on the ground. The wreck is covered with seaweed. Protection for lobsters, snails and cat sharks.

Want to dive in South Africa?