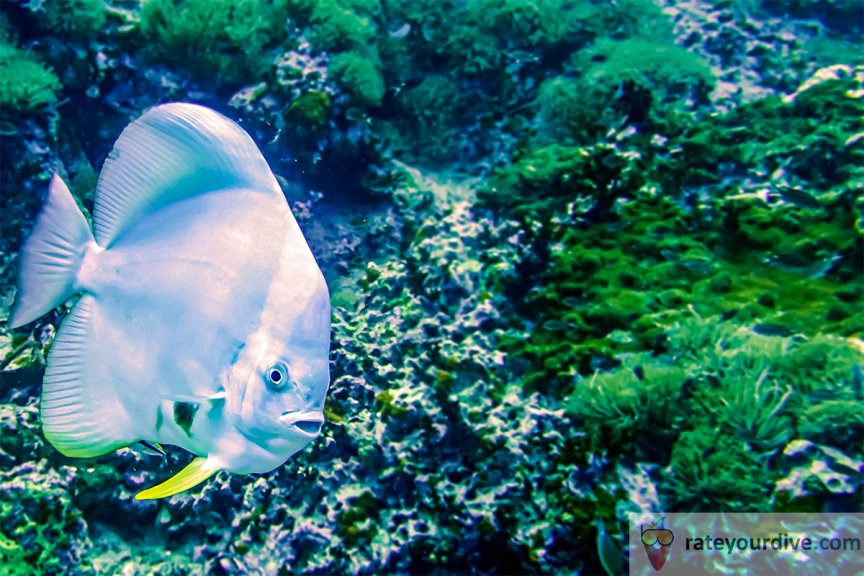 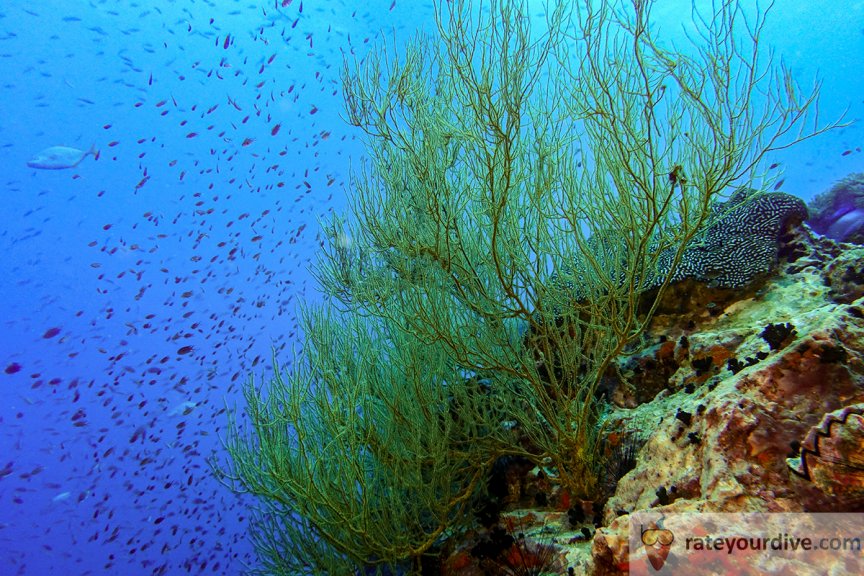 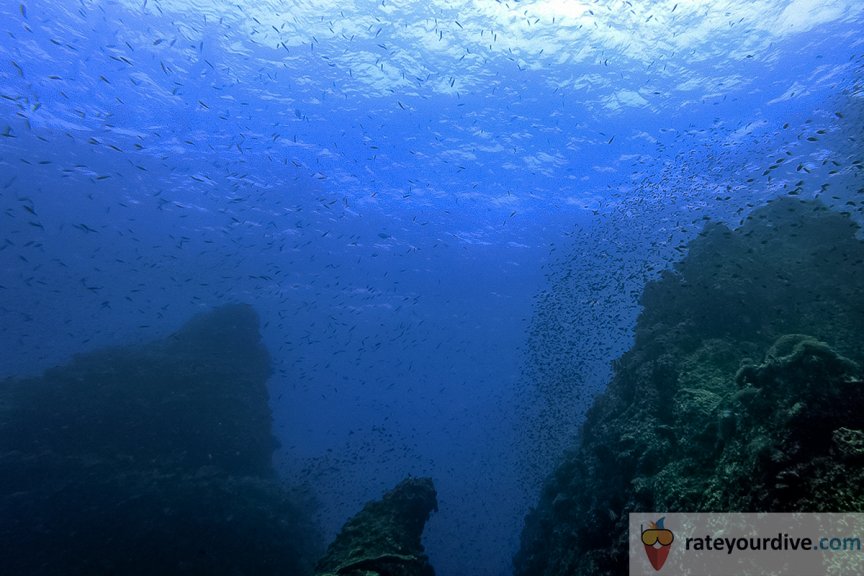 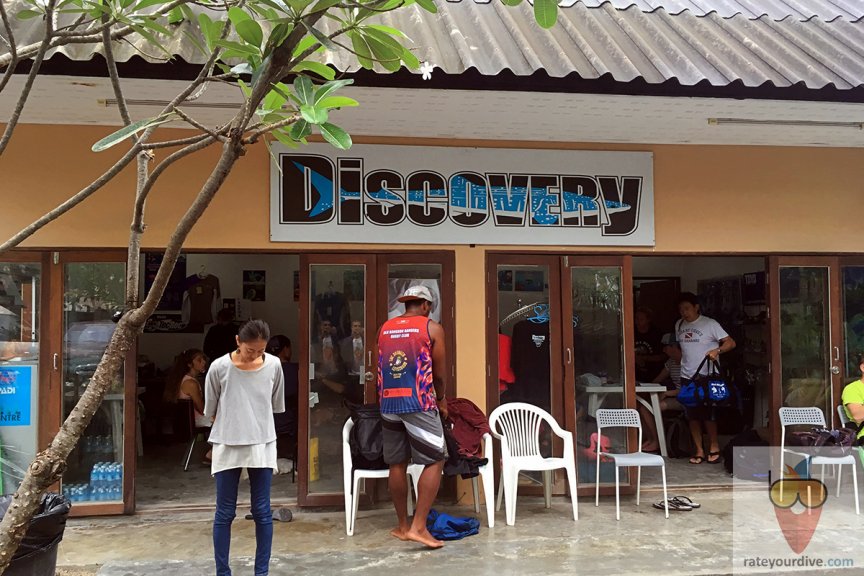 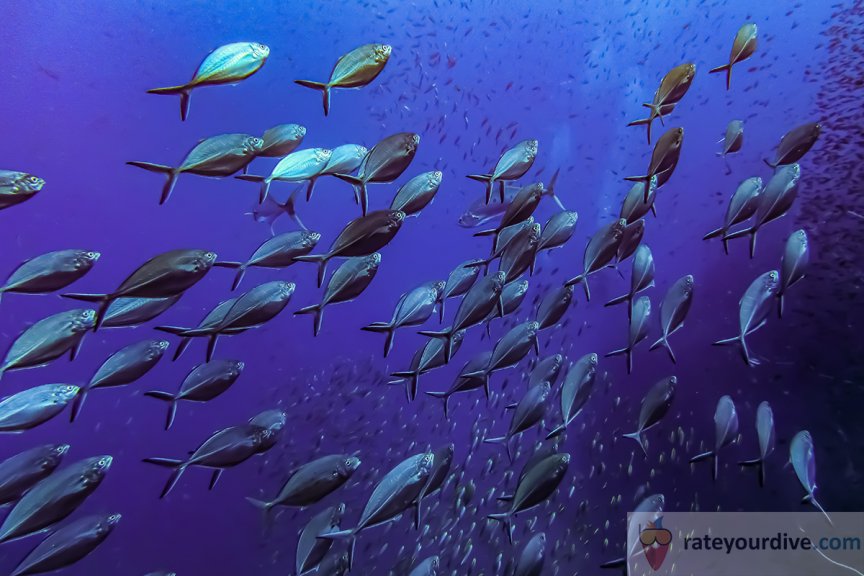 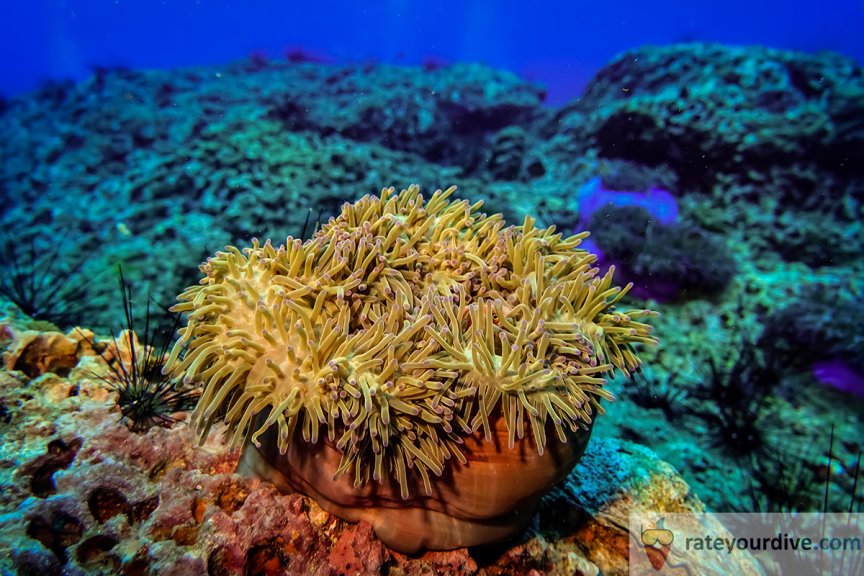 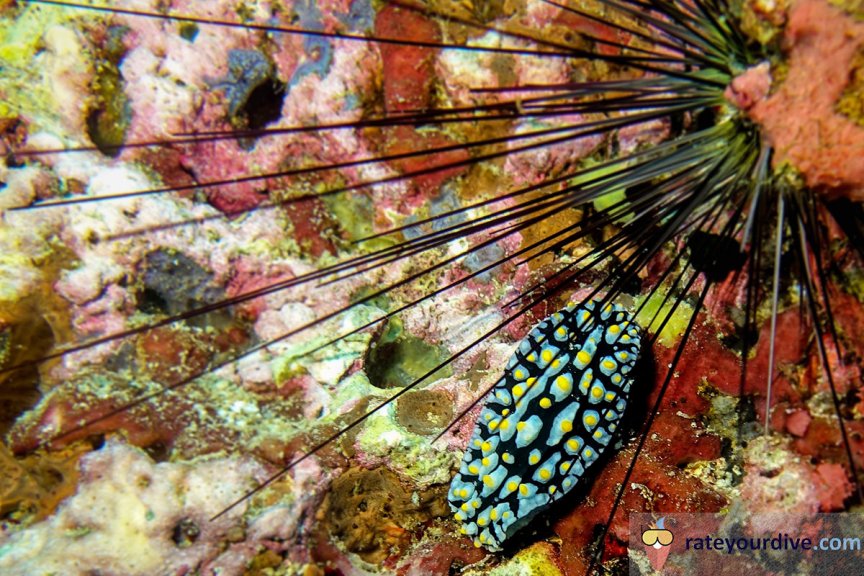 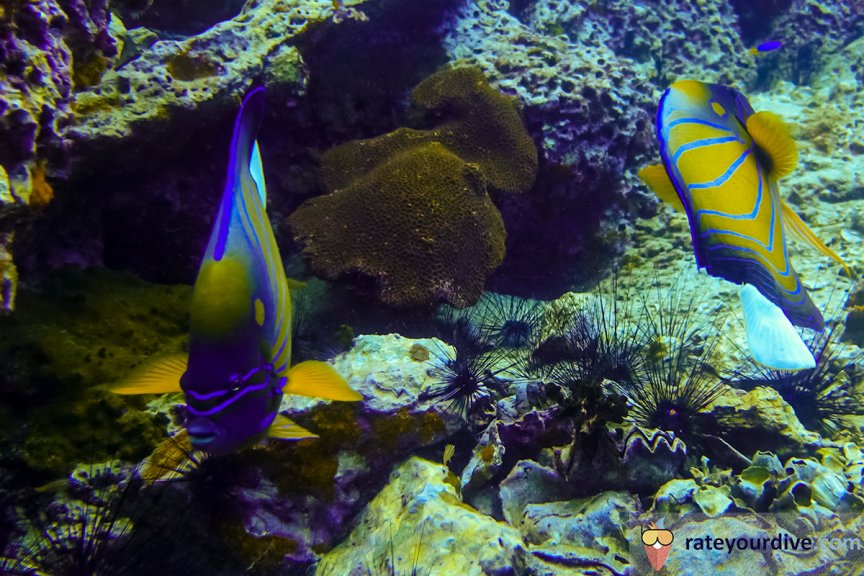 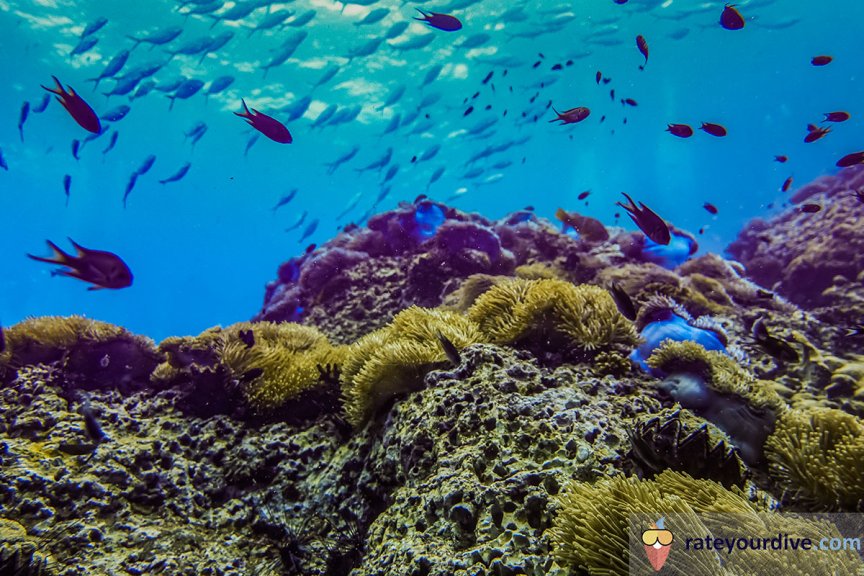 Saturday, 30 September, 6:00 am somewhere in the south of Koh Samui. The alarm clock rings. I have already been awake for a few minutes though. Full of anticipation regarding the upcoming additional diving excursion from Koh Samui to “Sail Rock”. Unfortunately Maria must take a rain check today, because she has caught a cold. 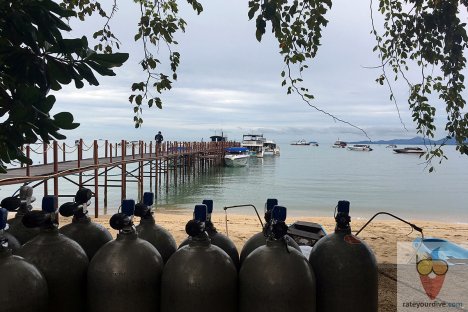 Upon my punctual arrival at the port at 7:20 am, I was immediately welcomed by Somkid, my guide for today. He showed me where I could leave my things and help myself to some tea and biscuits. My buddy was already sitting at a table in the common room of the diving school at the port (the office is a little bit further away). Ricky from New Zealand. How appropriate, Ricardo and Ricky. 😉 He is also a diving instructor and therefore we quickly found topics of discussion to get to know each other during our first small talk. Somkid went looking for another member of our diving group. Since it seemed that she was running late, he then started to supply us with the necessary basic equipment. Ricky received a wetsuit and fins. At a water temperature of ca. 29 degrees, I also like to dive completely without a diving suit from time to time. However, one look at the cloudy sky outside was sufficient this time to convince me to take a neoprene with me just in case. Better too warm than too cold. 🙂 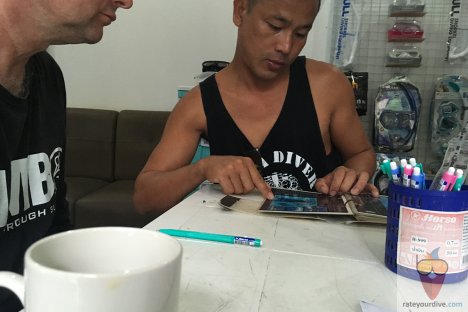 About the Do’s and Don’ts

When the group was complete and equipped with the gear, we were given our first briefing. At the other tables around us, 2 other diving groups were sitting for whom the same procedure was valid. Therefore there was an English, a German and a Japanese briefing in each case.

The content included the fundamental hand signals, how the dive would take place and, of course, what we could possibly see. Our safety stop was planned no later than at 50 bar. As usual, 3 minutes for 5 metres. In case of bad conditions (e.g. current), back to the boat either via the anchor line or swimming, thanks to our quite advanced group. 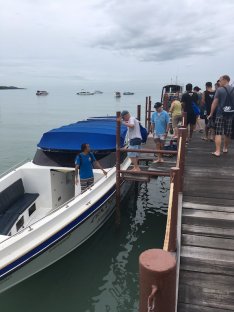 Shortly after, at 8:15 am, we were already on our way. Departure from Koh Samui. On board there were 13 divers, 5 instructors and three boatmen in total. This distribution not only made it possible for the groups to be kept small, with a maximum of 4 divers, but also permitted a practical flexibility, which we needed later on.

Before casting off, a few tips regarding safety and habits on board were imparted by one of the diving instructors. To my delight, the disposal of rubbish and the rule not to put on any sunscreen less than 30 minutes prior to the dive were explicitly mentioned. This was completed with the distribution of drinks for the ca. 50-minute journey. Alcoholic drinks were also on board. However, whoever was unable to resist those until after the second dive had to spend the excursion on deck regrettably. 😉 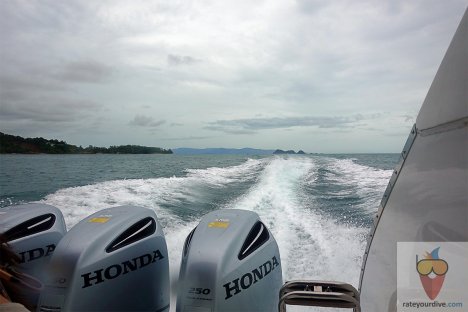 Small and inconspicuous, it protrudes out of the sea. All around it nothing but water. The lonesome “Sail Rock” is the stone-like spitting image of an iceberg. In any case, this is how I imagine that they look like this. Just plain white and cold and not “held down” by the seabed. Once arrived at the dive site, we were evidently not the only ones who knew about the reputation of the best dive site in the Gulf of Thailand. From the three surrounding islands, Koh Samui, Koh Phan Ngan and Koh Tao, diving schools offer a half-day excursion to this site.  Nevertheless, it was pleasant to see that every boat was not just dropping an anchor, but rather formed a row just like the pearls on a necklace. All of them joined together with buoys, which were placed next to the rock.  To the joy of the underwater world and those who know to appreciate such a procedure.

Air out of the jacket and descending

In full gear, the groups followed their guides one by one into the water, with the help of a large step over the stern. Due to the great visibility of no less than 30 metres, the four of us opted for the free descent next to the boat. First we went down to 15 metres. Below us laid the “Secret Pinnacle”. A sunken rock in close proximity to the actual dive site. There we found giant schools of yellowtail barracudas and fusiliers. On the rock itself, anemones and their tenants, the pink anemone fish, romped around in abundance. They were circled by a mine field of diverse sea urchins. The lovely circumstances approached our camera enthusiastic group. Thus we were able to take one photo after the other, cosily on our way towards Sail Rock. 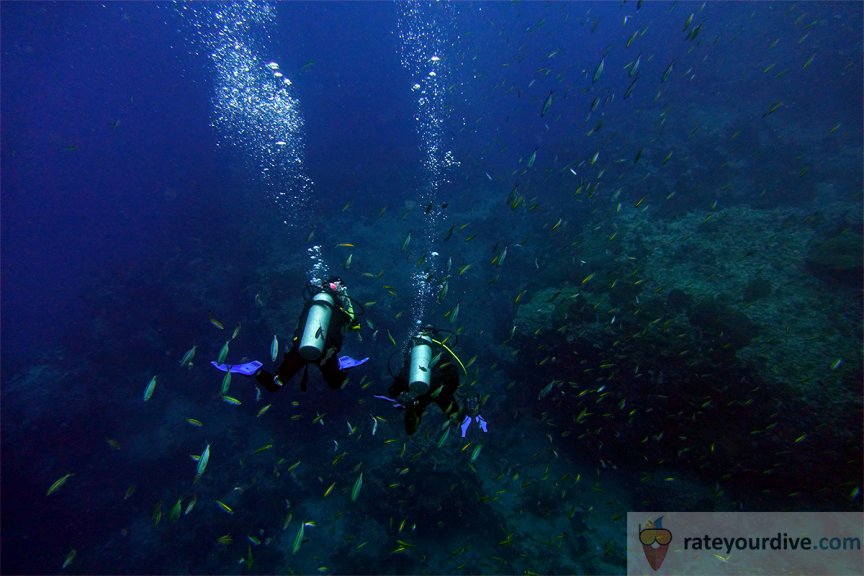 40 minutes later we were there. Somkid asked us about our remaining air, in order to plan the rest of the activity. I still had 100 bar. My buddy though had been less thrifty. With only 60 bar left, the first safety stop was already in sight for him. Luckily, at exactly that moment another of our diving groups passed by. After a brief verbal exchange, our new leader knew the score. Since she was out and about with only two divers, Somkid’s buddy and I gratefully followed her as a second team. 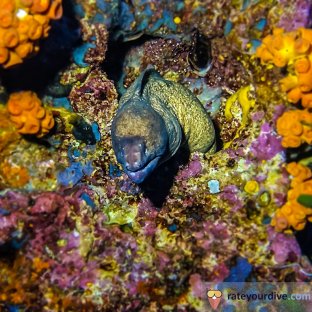 Consequently we were still able to have a relaxed round before we ended the dive with a safety stop swimming in the direction of the boat some 60 minutes later according to my watch and with 50 bar residual pressure in my tank.

On our surface interval, between the dives there were delicious noodles, chicken wings and a selection of fruit. Besides the usual soft drinks and water. The beer was (still) untouched by everyone, in order to be able to enjoy a second dive after a surface interval of one hour. Of course everybody hoped to be lucky enough to see a whale shark now, just like it had been the case on two days of that week. 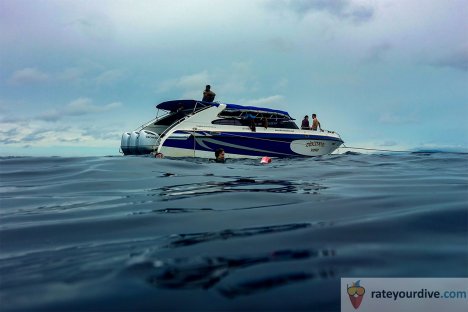 Due to the fact that our first dive had been relatively long and deep, we stretched our surface interval a little so that we would not be too limited by the no decompression limit during our last dive. This time I remained with the new group whose guide was Dominique. Since the group was less experienced, she decided to make a descent using the buoy line. We had a pleasant tour around Sail Rock at a maximum depth of 15m. The particularity this time was that we, one by one, passed through a small cave on our way, also called “chimney”. A moraine and a few flamboyant slugs were hiding in its obscurity. Before the exit, a white batfish swam, as if it were draped, up and down in front of my camera. 🙂 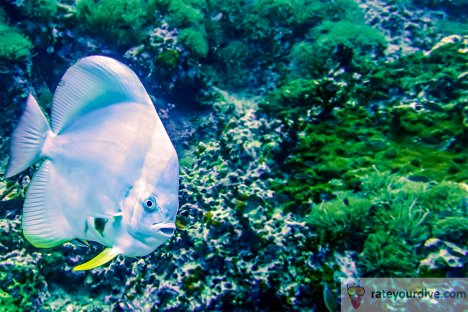 With a heavy heart, we ascended to the boat after our safety stop. I switched the diving regulator for a snorkel, in order to enjoy the visibility once again and maybe catch sight of a whale shark. But it was not meant to be. Oh well – you just can’t have everything. 😉

Back to Koh Samui

Cradled to sleep by the light waves, I awoke upon our arrival at the port of Koh Samui shortly after 1:00 pm. One of the diving instructors then informed us that we would receive the guides’ photos via a link to Dropbox about a week later. Finally we gathered together as groups in the common room, in the same way as before departing.  We filled in our log books together and exchanged a couple of our snapshots. After a large group photo, the excursion had sadly already come to its end. 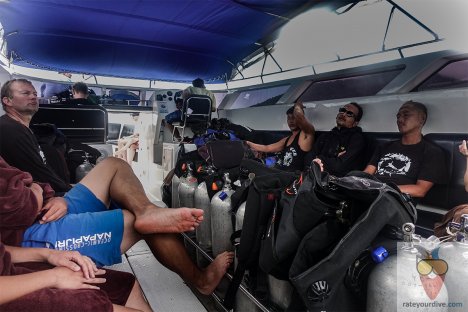 Many thanks to Discovery Divers, Somkid and Dominique, for that lovely day!