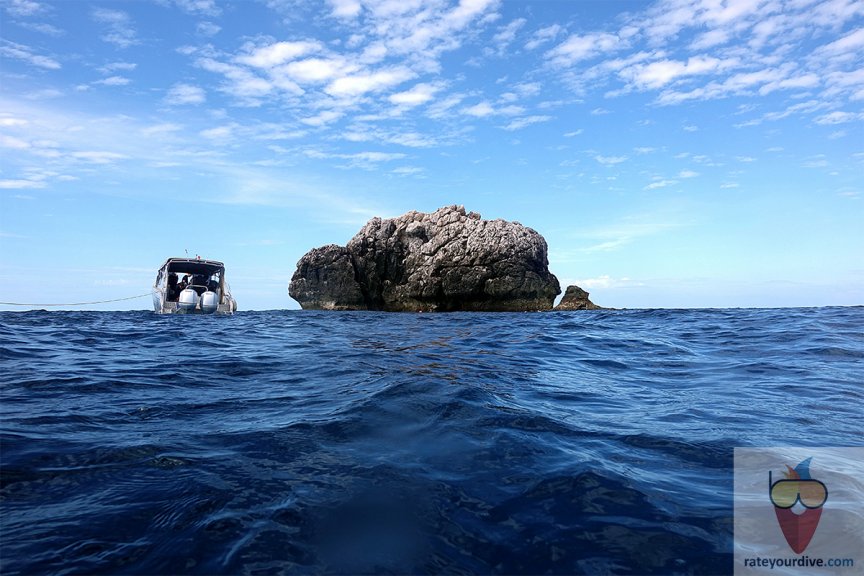 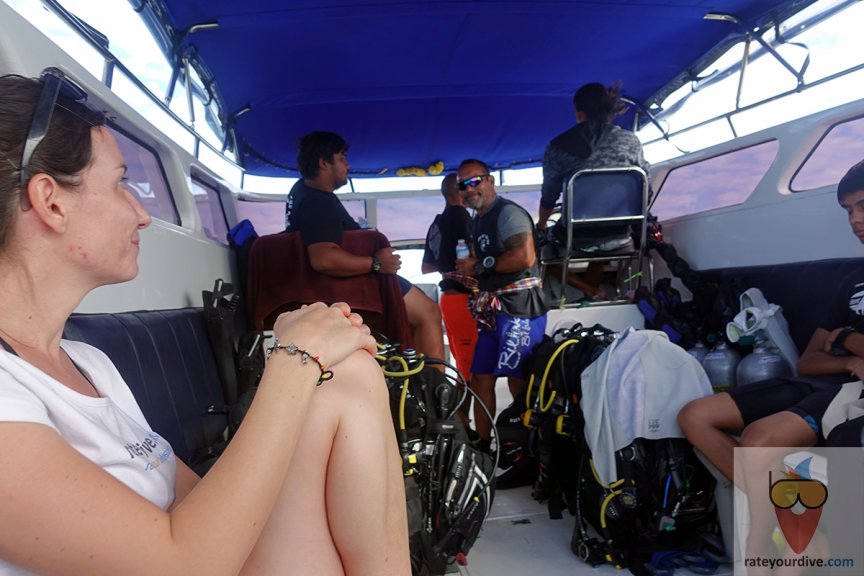 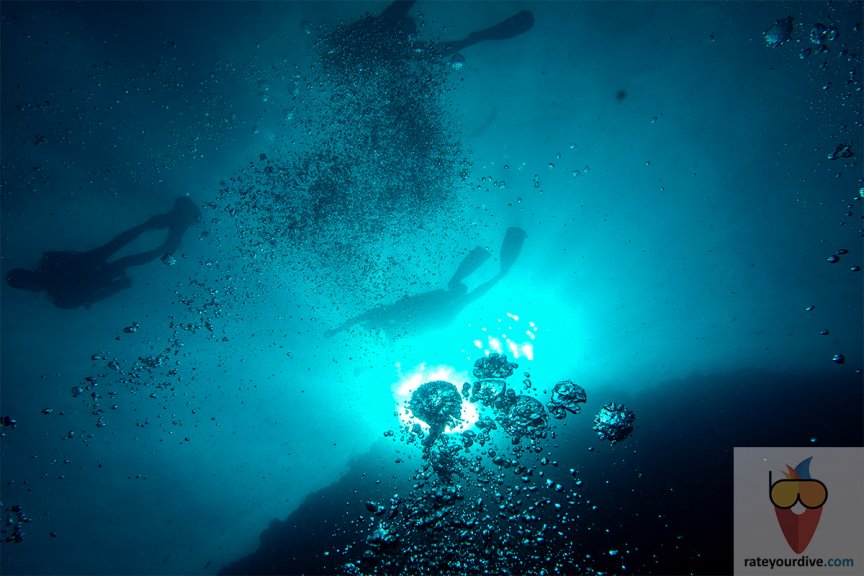 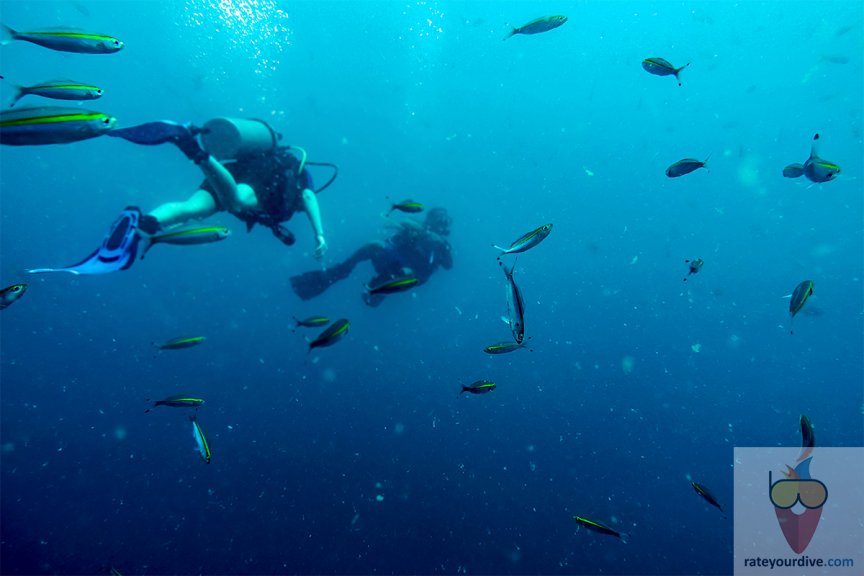 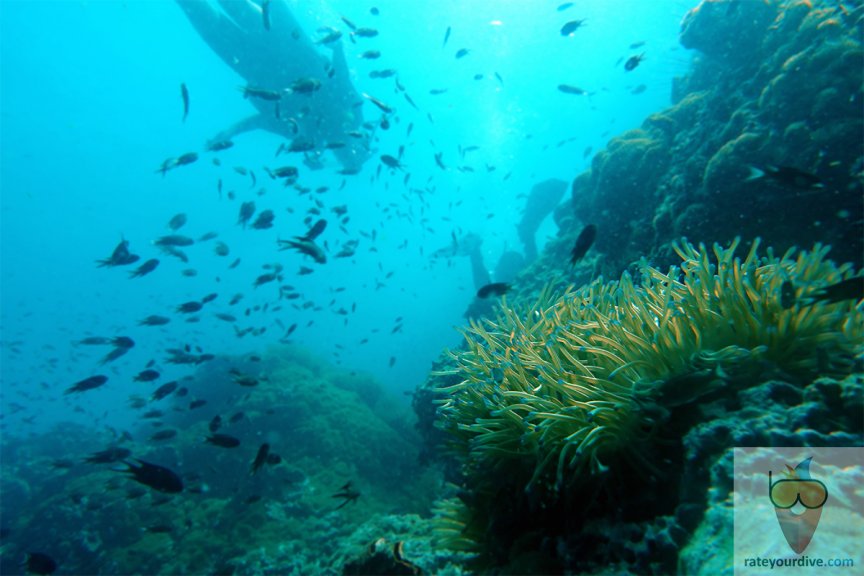 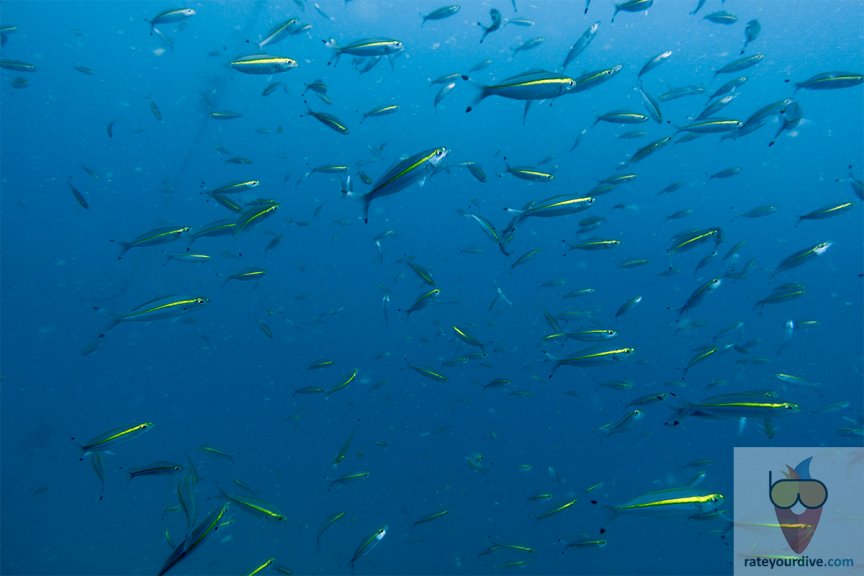 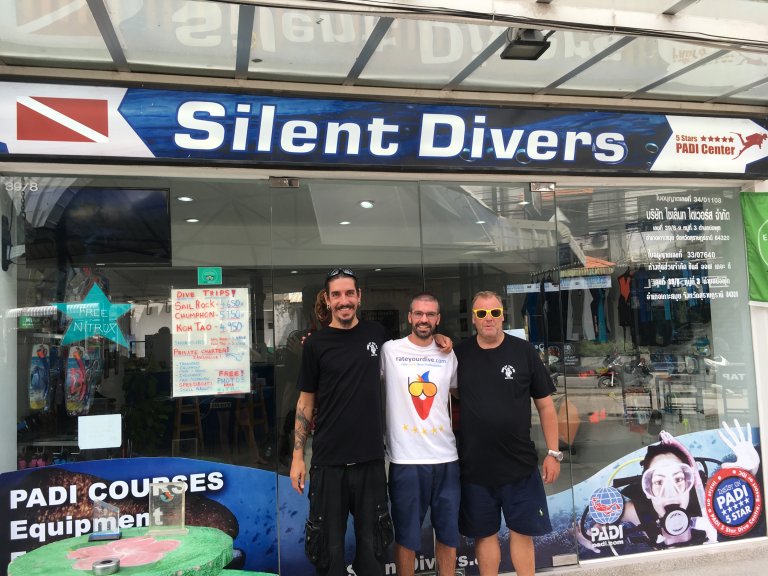 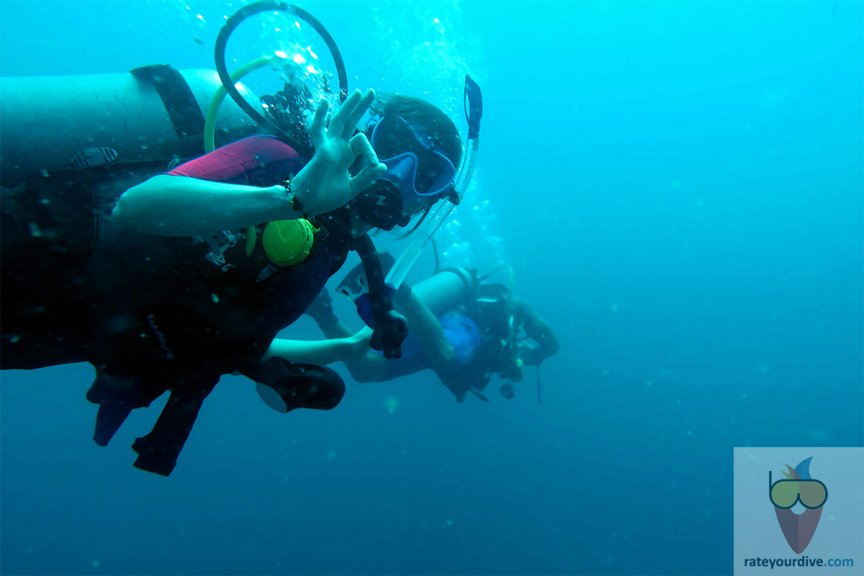 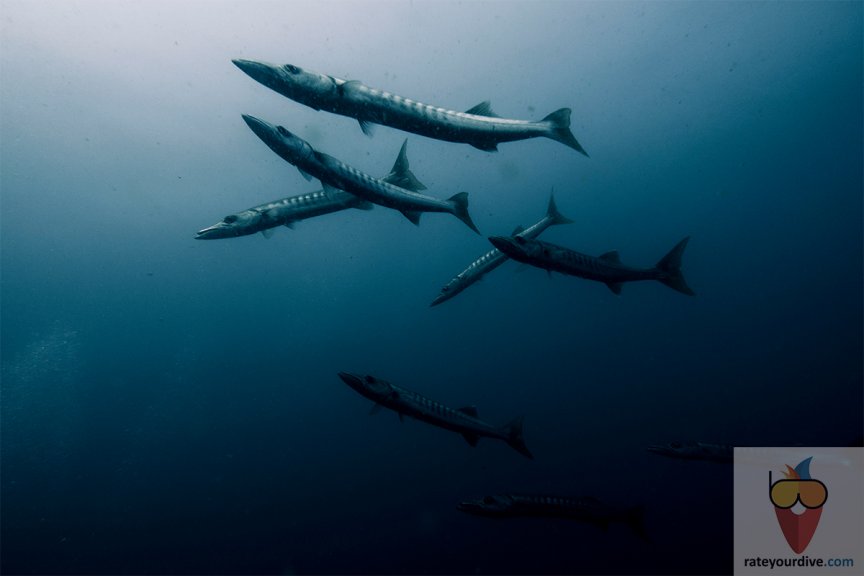 One Day at “Sail Rock”

Many divers agree that the dive site “Sail Rock” is the best one in the Gulf of Thailand. Frequent whale shark sightings, various schools of fish, corals, anemones and even a couple of little tunnels found in this block of stone right in the middle of the sea make it a “must dive” for every underwater explorer in the region. These are only some of the reasons why a lot of diving schools from the surrounding chain of islands go to this dive site.  From Koh Samui, Koh Phan Ngan and Koh Tao there is the possibility to cross off this highlight from one’s to-do list by going on a half-day excursion which includes two dives.

The freshly graduated Open Water diver Maria and I (Ricardo, diving instructor and founder of rateyourdive.com) were invited to such an excursion by the Diving School Silent Divers on Koh Samui. Full of anticipation, we set out early in the morning, in order to be at “Petcherat Pier” in the North punctually at 7:30 am. 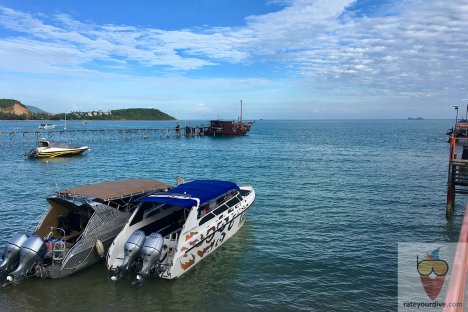 Upon our arrival, we were warmheartedly welcomed by our guide John. He works as a dive master for Silent Divers and is a former marine diver with more than 10,000 dives in total. In addition to this wealth of experience, there was a bonus aspect for Maria, who was somewhat nervous: He actually spoke German a little, so while we relaxed and had some coffee and croissants, he was able to give us the first briefing in our mother tongue. 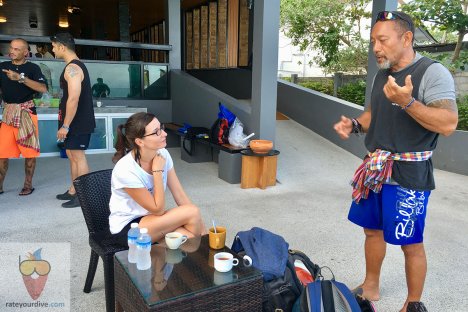 Above all, this was about what we would face that day.

We set out with two boatmen, 2 dive instructors and 5 divers at 8:00 am. During the drive from the port, John gave us another briefing on the subject of safety and the procedures on board. Thereby, we particularly liked the (unfortunately not usual) indication regarding the disposal of rubbish and cigarettes stubs, as well as the rule not to put on any sunscreen 30 minutes prior to the dive, so as not to harm the underwater world. 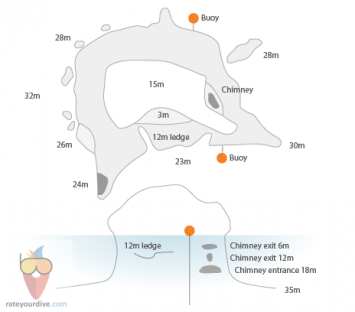 Shortly before arrival, John told us some last things concerning what to expect underneath the surface. Where do we dive along? What can we see while diving? 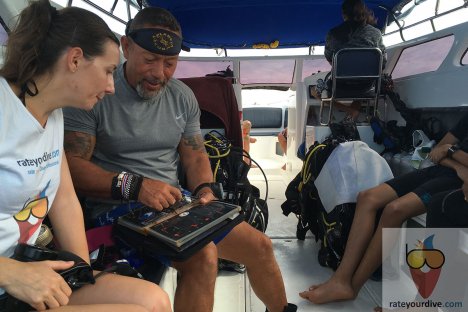 Opinions differ when it comes to what is the ideal size of a diving boat.  Ultimately it is and remains a matter of taste: 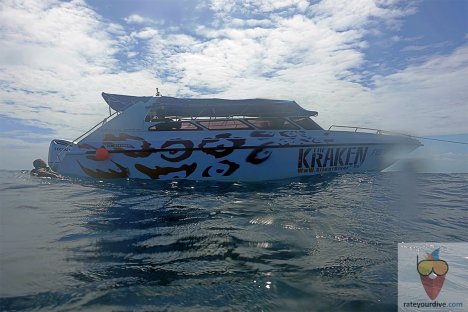 Once we arrived at the dive site, the procedure was simple and effective. Everyone put on his/her diving suit, provided that one wished to wear one at almost 29 degrees water temperature, and subsequently strapped on the prepared weight belt. Then the already assembled equipment was set up at the stern, so that one could slip into it. The Buddy Check was taken over by John, who checked everything while kneeling in front of us. Afterwards we went one step down in the direction of the water, where the fins were put onto our feet. 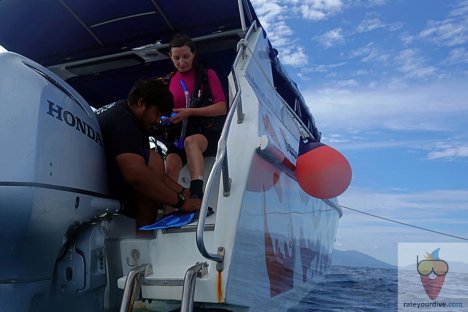 Another step closer to the cool refreshment was the “plank”. Air into the jacket. Right hand – mask and diving regulator. Left hand on the weight belt. Look straight ahead and one big step forward. 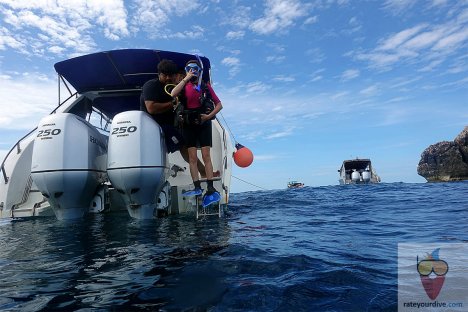 The eponymous “Sail Rock” was then only a few minutes of pleasant swimming away. On the way, one could already have a first look at the life underwater and thus leave the agitation (especially for Maria) and rough drive (particularly for me) behind. We used the line attached to a buoy for the controlled descent up to a depth of ca. 10m first. On that day the vision was somewhat limited due to the many suspended particles. Nevertheless, from there we went around the rock while regularly looking into the blue water in search of the largest fish of the sea – the whale shark. One day before, two of them had been sighted there at once. 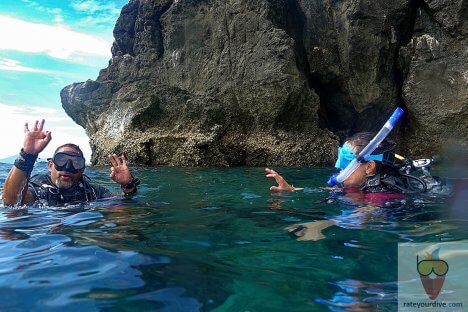 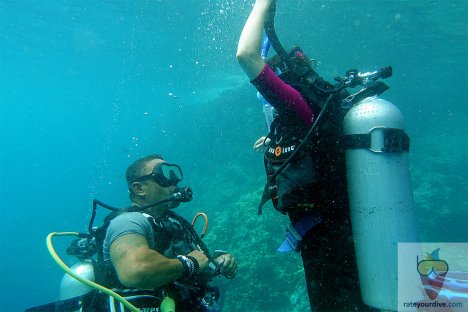 Before we returned to the buoy line for a safety stop, we passed a very beautiful swim through called “The chimney”. John went first and we followed. With the torch on my camera we were able to see a lot of hiding fish and even some colourful nudibranchs. Later back on the boat they told us the holes in the “Sail Rock” came from bombs which used to be dropped onto it for testing purposes by the marine. 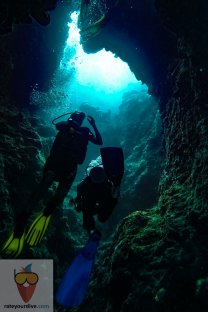 Between two dives, there were plenty of vegetarian noodles, chicken wings, water melons and also a selection of drinks. Everything is included in the price. After about an hour of surface interval we slowly got ready to descend again. The procedure was the same up to the descent. 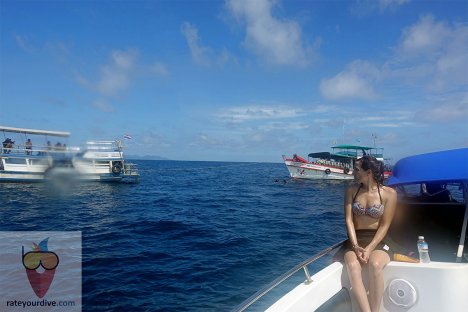 This time though we took a different route, in order to exploit all possibilities of sighting a whale shark. We moved a little bit away from the dive site towards a rock that was further which was similarly occupied by a minefield of sea urchins and anemones. On the way there, a giant school of yellowtail barracudas could be detected. Unfortunately it was not meant to be. No whale shark for us, but still a dive site that is absolutely worth seeing with a rightful image! Above all for fans of fish schools and large fish, this is clearly a recommendation on our part. 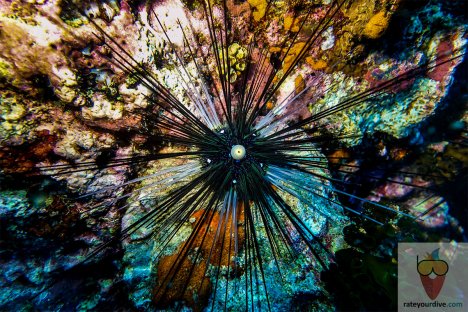 On our way back, half of the group was already looking at the pictures taken, while the other half was taking a well-deserved nap. Shortly before one o’clock, we were back at the port just in time for lunch.  This was followed by the final completion of the logbook.

At this point we would also like to thank John and the whole team of Silent Divers for this great excursion once again. Ratings and further details about the diving school and the team of diving professionals can be found in their profile: https://www.rateyourdive.com/profiles/silent-divers 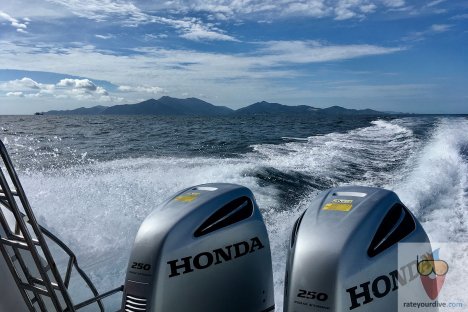 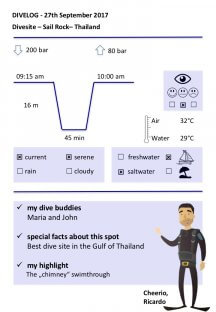 The diving school “Silent Divers” has been operating on Koh Samui for a total of 15 years. Luis has been the base leader for 4 years. He is a supporter of personalised attention and small groups. There are never more than 10 divers on the boat. Therefore there are always only small groups for dives as well as for diving courses. This enables him maximum flexibility in order to meet the needs of his customers. For instance, diving courses can also be started with a single person instead of “collecting” customers. As one of the few diving schools on Koh Samui, Luis possesses his own compressor and tanks, as well as the possibility of diving with nitrox. And that at no extra charge! 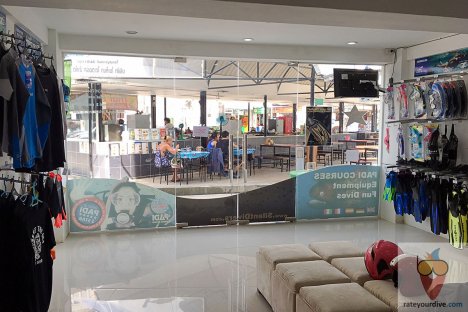