How does one actually become a Diving Instructor? 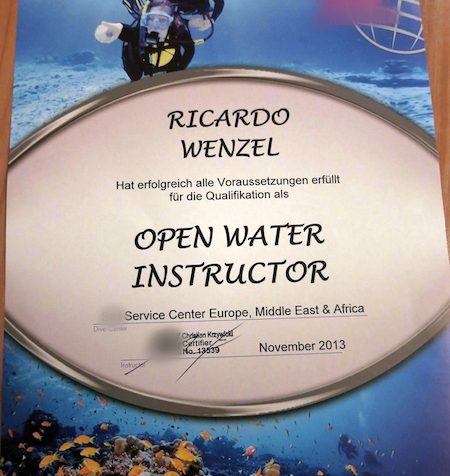 That is a good question!

There are various possibilities to become a diving instructor. In order to give you a vivid example and not simply philosophise about the theory, at this point I would like to explain how I became one. In order to preserve the objectivity of my site I will not name any precise places or names of diving schools and diving instructors.

The idea out of nowhere

It all began when I was tired of my office job in Germany. And I was really fed up. I was dead set on changing my lifestyle. Via my girlfriend at the time, I finally came up with the idea of diving. She told me that she had dived in Thailand once and she highly praised the fascinating underwater world. Incidentally, she also mentioned that she had been offered to simply stay in order to do a training course to become a diving instructor and subsequently work there as one.

Then this pricked up my ears!  Beach? Sun? Sea? And that every day. Practically like a new office – only in paradise. After that I secretly began, during work (Sorry boss!) to continue researching in this direction. First, of course, I wanted to know what the whole thing would cost me and my girlfriend. Therefore, offers were obtained and first contacts to diving schools and diving instructors on site were established. I eventually stroke gold with a package having the promising name “Change of Lifestyle”. That hit the nail on the head! Then that was exactly what also my girlfriend and I wanted at the time. A change in our way of living!

Quickly we became aware though, that we could not drop everything overnight in order to board the next plane. First of all, the necessary means were a must and the dissolution of two apartments had to be planned. From then on we lived on the back burner. This means that every cent which was not absolutely needed went into the money sock. We set ourselves the goal to start our journey in fairly accurately 6 months. We applied for our visa, got the necessary vaccinations and already organised accommodation on site. Of course, travel guides and backpacks should not be forgotten.

Time passed by faster than we thought in spite of the enormous anticipation. I can still remember as if it were yesterday, how we first met our diving instructor at the bar next to the diving school.  We had previously only seen a picture of him and therefore we had no idea what or even whom we were engaging in.

Our life changing diving course was already starting on the next day. Having never dived before, I was naturally enormously excited and could not sleep at all. However, all worries were in vain and they evaporated the first time I touched the bottom of the pool with full diving gear after the theory lesson. Absolutely impressed by the silence underwater and the possibility to breathe, I performed my first fin strokes. The exercises which had to be completed were also much easier than first feared.

In about 5 months, we went through all of the necessary stations of our chosen diving organisation from the entry-level diving course to the advance course up to dive master. With this level, we were still not “complete” diving instructors, but rather “diving instructor assistants”, nonetheless it was the first step in the domain of diving professionals and enabled us consequently to earn money with our newly found passion. For this reason, we decided to remain at this level first and to acquire experience, before continuing our training.

Essentially we led already certified divers through diving sites of the region that were now best-known to us, assisted diving instructors while they trained beginners and advanced students of diving certificates and taught introductory and refresher courses autonomously. We learned something new every day and hence earned our daily bread.

My journey then led me from there on to Australia, where I was able to work at the Great Barrier Reef. After a subsequent short stay with my family in Germany, I decided to take the last step to become a certified diving instructor with another diving organisation. I completed this part of the training during another 6 months by working for a diving school in Spain, which I concluded with a successful theory and practical exam in Germany.

This was my personal journey “from zero – to hero” 😉

I am available for follow-up questions via the contact form at all times!