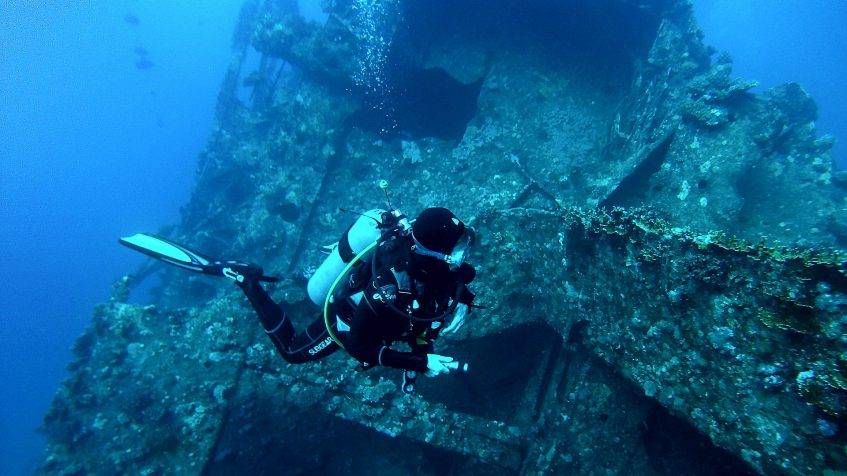 The origin of the wrecks at the Brother Islands

The loud crash frightened the crew from their bunk. The abrupt impact shook the ship’s iron hull. Captain J. Craig had no idea anything good and he was right. His 150 meter long Numidia had hit Big Brother Island and was stuck. Without a chance to get free again. Although he managed to recover the cargo, the Numidia was still lost. The spectacular collision occurred in 1901.

In addition to the Numidia, two other ships sank at the Brother Islands. In September 1872 the Dutch Prins Hendrik collided with the island. In 1957 the Aida sank during a storm. They underline the danger of the Brother Islands. A danger that still exists today despite modern navigation.

The wreck of the Numidia lies at the northern tip of the Big Brother on a slope. The remains of the destroyed bow can be seen from a depth of eight meters. Surrounded by railway tracks. A large railway wheel fascinates photographers. From a depth of 15 metres, the body of the ship takes on contours.
The ship is in a surprisingly good condition. Structures and masts are clearly visible. Also ropes and cabins. The holds and the engine room are also easy to dive. Boilers and pipes are waiting to be explored. While stairs separate the decks and lead up to the keel level. All rooms are very low and should be examined carefully. We recommend that you take a strong 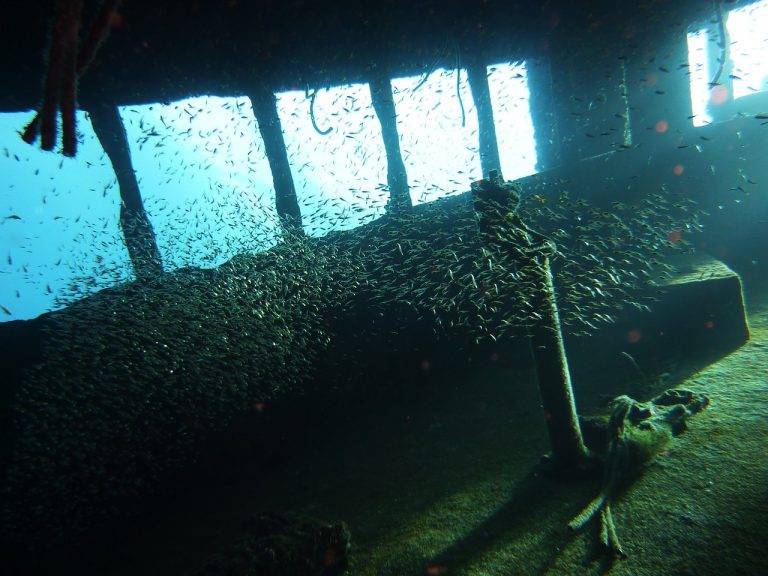 As the depth increases, the growth of the corals decreases. The contours of the Numidia wreck become even clearer. The temptation increases to dive further towards the stern. But this only becomes visible at 80 meters. The propeller and rudder are at 90 metres. Too deep for “normal” divers. But also the normal dive at the wreck of the Numidia requires experience. Because the place at Big Brother Island is most affected by current, wind and waves.

Diving at the wreck of the Aida – Big Brother Island

Aida is not for beginners. On the one hand because of the depth. The wreck starts at 27 meters. The screw is at 60 meters. On the other hand there are the waves and the currents. Aida is located west of the northern tip at Big Brother Island. On a slope. Only 50 meters away from the Numidia. The first parts of the wreck can already be found at a depth of 15 metres.

The wreck is broken. Only a part of the ship is still preserved and continues up to the propeller. The fracture is in the 27 metre range. There you can dive into the Aida or out again after having taken the way through the upper deck.

The remains of the railing and a loading mast show wonderful vegetation of soft corals. This vegetation, together with surreal light conditions, creates a unique atmosphere.

Diving into the wreck of the Aida

You can easily enter the rooms below deck. The deck of the hull resembles only a skeleton. The propeller and rudder are bent. They are at a depth of 60 metres.

But there is more to discover. Be it the portholes covered with sponges. The chimney, which is about 50 meters deep. Or the former cabins below deck. They offer good protection in currents. This protection is also appreciated by many fish. The ship is particularly dominated by perch. Swarms of glass fish stand together with lionfish in the upper areas. Tunas, barracudas and reef sharks pass from the open water. We therefore recommend you to take a look into the deep blue again and again. Because you are never safe from surprises at this place.

There are many rumours about the whereabouts of Prins Hendrik. But we still don’t know where she sank. The crew of the lighthouse is sure that a big ship sank on the west side of Big Brother Island.

An experienced Egyptian captain might have found a trace. According to him, during a dive at 80 meters from the west side of Big Brother Island in the reef, the imprint of a ship was seen. This could fit the dimensions of the Prins Hendrik.

However, the wreck probably slipped over the slope into the depth. It is almost certainly beyond the areas accessible to recreational divers. But maybe it’s reachable for Trimix divers. More details about the wreck of the Prins Hendrik are not available at the moment.