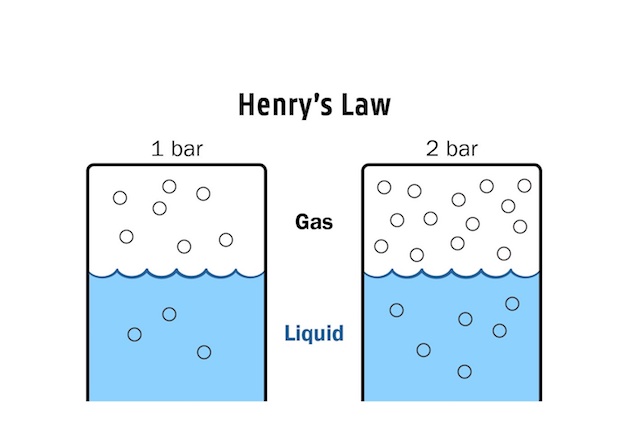 Henry’s Law is a law of physics which deals with the dissolution of gases in liquids. Concretely it says the following: At a constant temperature, the dissolved quantity of gas is directly proportional to the pressure of the gas on the liquid. If the temperature sinks, this correlation is not valid anymore. Then the quantity of the dissolved gas in the liquid increases.

This may sound complicated at first, but it is important for diving especially for decompression. When descending, the pressure of gases inside the body (breathing air) increases. This is due to the risen pressure onto the body and thereby these are increasingly released into the body fluids. Depending on the diving depth, this process can take some minutes. Conversely, the release of gases when ascending can last for some hours due to the diminished ambient pressure.

Thereby, nitrogen is the gas that needs the longest time to be eliminated. Since oxygen is transformed into CO2 in the breathing air and as such gets out of the body faster.