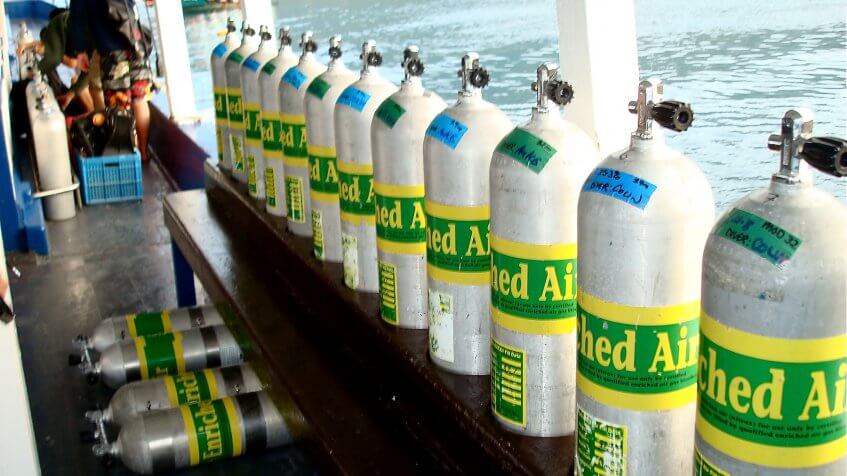 Nitrox (also called Enriched Air) is a mixture of gases, which you can use for scuba diving. In comparison to “normal” breathing air, this mixture has a higher concentration of oxygen. Its name comes from both of its components, namely NITROgen and OXygen. Other gases are only present in smaller quantities. Diving gas which is composed of three main elements is designated as “Trimix”.

What is NITROX composed of?

The gas mixture has been used in the USA for many decades. In Germany though it has only become more popular since the 90s. When you buy such a mixture, most of the time two numbers can be found on the bottle. The first one designates the level of oxygen and the second one the level of nitrogen. So a mixture of 55/45 has 55% oxygen and 45% nitrogen. Warning: In the USA the nomination is exactly the opposite! In the example, 45% oxygen would be present.

Which mixing ratio should I choose?

The mixing ratio of NITROX depends on your planned diving depth. Then on one hand, you want to have as little nitrogen as possible in the mixture, in order to stay longer under water. On the other hand, you want to avoid oxygen poisoning due to a too large share of oxygen. Before beginning to dive, look for the right mixture with your diving instructor and observe strictly the stipulated depths.

The advantage of the gas mixture: In comparison to normal compressed air, your no deco time is prolonged. In addition, the risk of decompression sickness when ascending diminishes, because the body is not as strongly saturated as with compressed air.