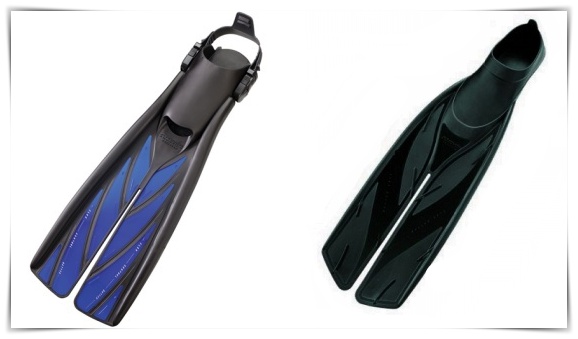 They are not a faux-pas of a handyman’s jigsaw or a sheer design gimmick! Split fins, alias fins with a gap in the middle of the fin blade, are plain and simply the result of fretted tinkerers, who wanted to get even closer to man’s dream of more effort-saving and effective movement in water.

With every fin stroke, the swimmer presses the fins against the water. The water retroacts with its own equal amount of power on the fins. This is, in principle, the power which pushes the swimmer forward. Therefore, the firmer, more strength intensive a swimmer with normal fins kicks, the faster he advances, but in return he consumes a lot of energy.

This is different with split fins: With them, part of the surpressed water thrusts itself through the middle gap. The swimmer has less water resistance on his fins, kicks less hard, consumes less energy. The propulsion is effort-saving. A further feature of the split fin blades is their modified flexibility:  During the leg stroke, the fin blades of the split fins round off in a specific way. Their form then resembles airplane wings or swelled sails and the same physical legalities act. Pressure differences on the bottom or top of the arched fins produce a sort of suction effect in the swimming direction. In order to maintain this force that pulls forward, hence to be able to flit through water while saving efforts, the split fins must be moved with a higher frequency than normal fins.

Conclusion: The split fins user must invest less energy in order to carry out a fin stroke. His energy input for forward motion is less.  Instead of longer, stronger strokes, the success formula for maximum efficiency with split fins is: smaller, lighter, quicker fin strokes. Split fins are exceptionally suitable for economical, longer swimming. However, this is valid here as well: Trying it out and then opting for the fin type that you feel most comfortable with.

Split fins are most effective in bodies of water with little or no current, as well as for swimmers, who are prone to leg cramps or have knee problems.

For more technically demanding dives or for diving areas with strong currents, you should use fins with a continuous blade, in order to be able to use the propulsion of the powerful leg strokes immediately. Moreover, motion and position control is more difficult with split fins. For backward movements, breaststroke, turns, etc. normal fins are often better.